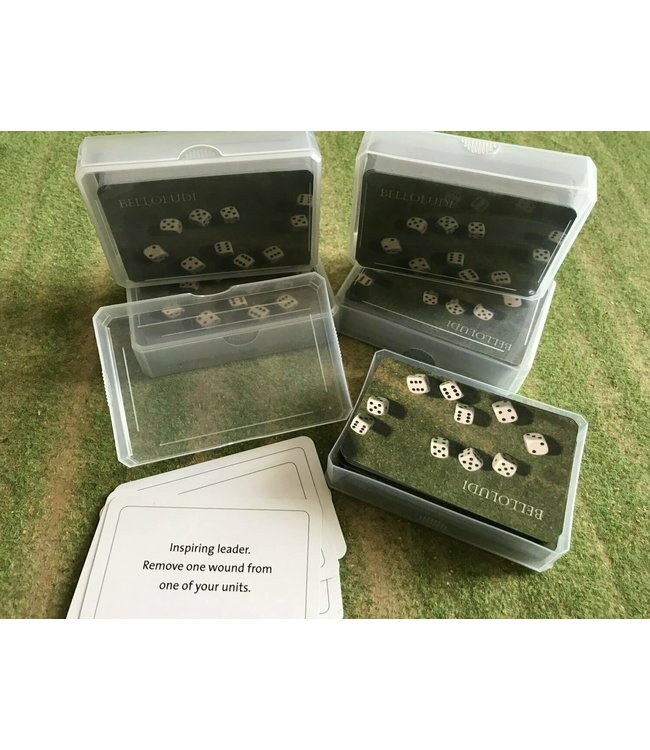 Ways to play with your BelloLudi card deck.

BelloLudi has created a set of cards to use with your chosen set of rules. These cards have been developed in order to create more interaction in the game. Originally for multiplayer game, but we found them just as useful in a two-player game or even solo. There are 21 positive cards, 21 negative and 12 commandant cards that can negate the positive as well as the negative. The positive cards are a boost to your own troops and the negative cards effect your opponents troops in a negative way.

In a multiplayer game, we give one card to each of the commanders. As commanders control a brigade or group of units the added value for multiplayer games is obvious. Do I keep my card or help my ally? It is also possible to give the overall commander all the cards, so he/she can help his/her subordinates to achieve their goals. In large games we advise to limit the number of cars per side to six, but then again, it is up to you.

Cards can be played at any moment in the game, either in your own turn, or in your opponents turn as an interrupt. At the end of your turn, you can replenish your cards to the number you started with. So, if you played three out of the six cards, you can collect new cards up to the number you started with. Also, you may swap any card from your hand for another. This might be helpful as some cards will not have any effect because of the way the game is unfolding. Just put the cards you wish to swap onto the discard pile and collect the same number of new cards.

An alternative way, which works well for solo games, is to draw a card at the start of each turn. This could also be done at the end of your turn, depending on your preferences. You can then decide to hold the card for future use, play it, or discard it.

So, if you want to put some more interaction in your games, why not use the BelloLudi card deck?

Your battles will never be the same.