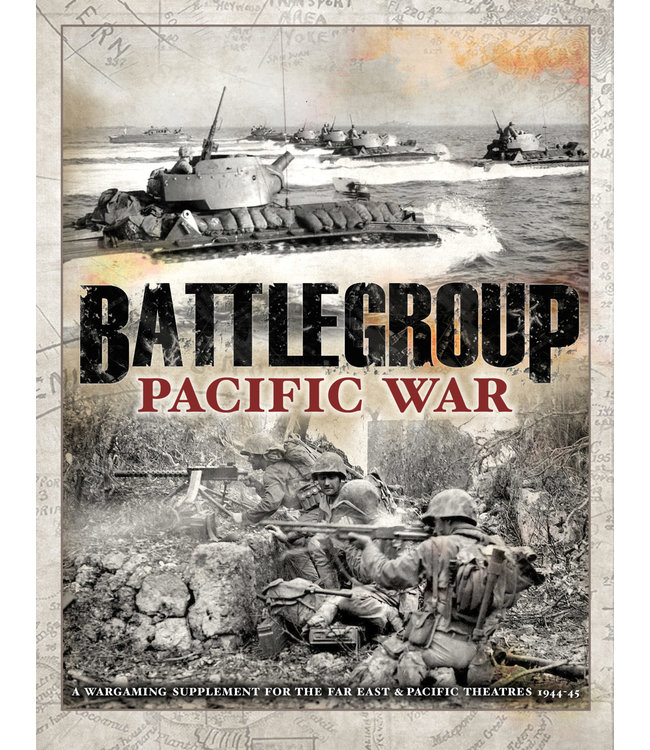 A fantastic 204-page hardback supplement for the Battlegroup gaming system, covering the War in the Pacific Theatre in 1944 & 1945. You will need the Battlegroup rulebook for full enjoyment of this supplement.

After the Japanese launched surprise attacks on the US Fleet at Pearl Harbor, on the Philippines and Malaysia, their new empire has expanded across the Pacific, over-running smaller nations and forcing the Allies onto the defensive. After finally stalling Japan’s rapid advances, the Allies are starting their own offensives. From the deep jungles of New Guinea to the remotest of volcanic Pacific islands, US forces are now launching repeated amphibious operations to roll-back the Japanese threat and fight their way to the enemy’s homeland. From the Marianas Islands, to the Philippines and with the British 14th Army in Burma, by 1944 the ferocity of the Pacific War had reached its zenith.

HISTORICAL BACKGROUND
A complete overview of the late Pacific Theatre, from the Gilbert Islands campaign through many battles on and around New Guinea, Bougainville and the Marshall Islands to the invasion of the Philippines and the dramatic battles for Tinian, Saipan, Peleliu, Iwo Jima and Okinawa, with the US Marine Corps and Army forcing their way ashore in successive amphibious assaults and then fighting to clear the most ferocious and determined of enemy’s from their hidden caves and bunkers. This book covers the bitter fighting from Tarawa to Okinawa, until Japan’s final surrender.

ARMY LISTS
Five army lists designed to be played with the equipment and character of the principal combatants in the Pacific Theatre: US Marine Corps divisions in their specialised amphibious assault role, alongside US Infantry Divisions to face Japanese Infantry Divisions and their smaller ‘oceanised’ divisions used to garrison distant Pacific islands. Also, British and Commonwealth Infantry Divisions for 14th Army in Burma, along with alterations for the Australian divisions on Bougainville and Borneo.

SPECIAL RULES
New rules to adapt the core Battlegroup rules to the battlefields of the late Pacific War. Recreating the character of the jungle war, with its tropical conditions, reliance on infantry warfare against a ferocious Japanese foe low on men, equipment and supplies, but with an almost unbreakable will to fight. The book includes a new Battle Rating counter sets to better recreate the character of the Pacific War, including such events as dangerous Japanese booby-traps and their occasional last desperate Banzai! charges.