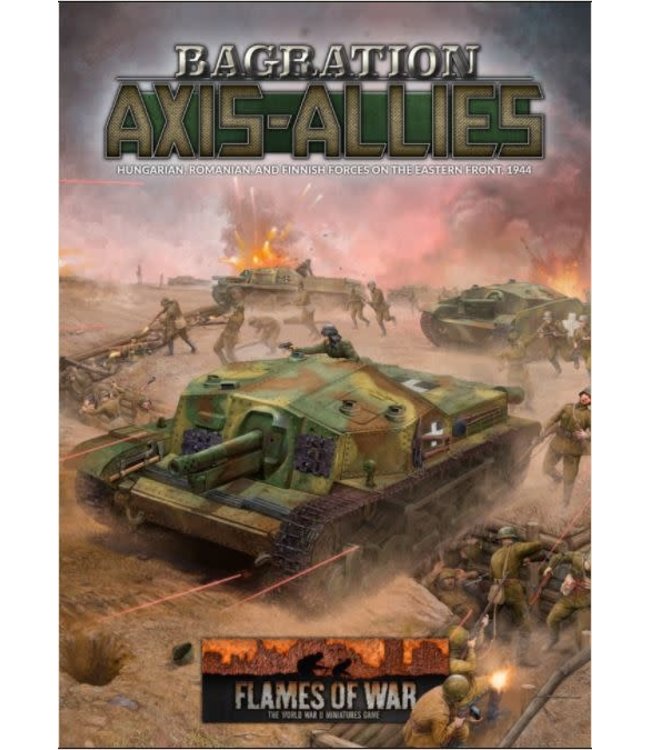 In 1944 Stalin’s Red army is on the attack. While it  throws the Germans out of Byelorussia, it also goes about defeating Germany’s allies; Finland, Romania and Hungary. The Romanians hold off the first Soviet attacks, but a second massive offensive in August 1944 sees them overwelmed. They surrender and swap sides to fight alongside the Soviets. Meanwhile, the Finns also fight for their survival as the Soviets attempt to steamroll them out of the war. They fight the Soviets to a standstill and agree a peace, but are forced to to turn on the Germans. Then three massive Soviet Fronts turn on Hungary, defended by six German and Hungarian armies. The great red sledgehammer is soon swinging, as the Soviets and Romanians launch an assault toward Budapest. Axis armoured forces attempt to stop the encirclement of the city. This savage and bitter struggle will last for 100 gruelling days.

Inside Bagration: Axis Allies you will find:
Background on the Finnish, Hungarian, and Romanian Armies during the epic battles for the Eatern Front in 1944 and 1945.

Instructions on how to build a Finnish;

Instructions on how to build a Hungarian;

Instructions on how to build a Romanian;