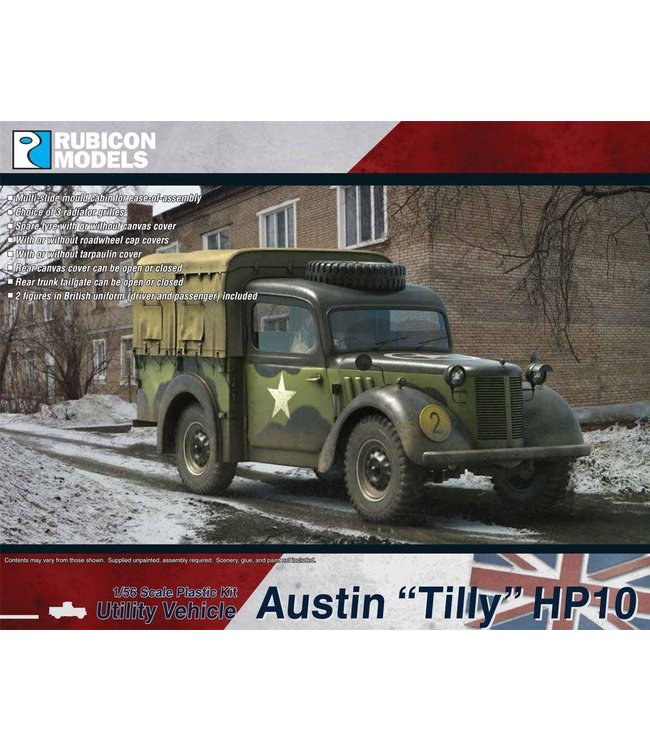 A Tilly (from "Utility") is a utility vehicle produced during World War Two based on existing car designs for use by the British armed forces.

At the outbreak of the war, the British Army was still in the final stages of mechanisation.  There was a widespread shortage of vehicles of all sizes which became more acute when the Army was mobilised for war.  In particular there was a lack of light vehicles for local liaison, communication, transport, casualty evacuation and general utility work at the smaller unit level (that of the company or battalion).  While senior officers may have a staff car, junior officers and other ranks found motorised transport indispensable in an increasingly mechanised army where movements could be made of dozens of miles on graded roads.

Faced with a lack of utility vehicles, the Ministry of Supply co-ordinated with the major British car manufacturers to produce military utility versions of their existing mid-size saloon cars.  They were all officially classed as Car, Light Utility 4 x 2.

The adaptation of each manufacturer’s chosen model to “Utility” specification varied in detail but was broadly the same.  The rear body was swapped for a simple pickup truck load bed covered by a canvas roof (commonly known as a 'tilt'), making the Utility a two or three seater in the cab.  The bodywork was simplified with simpler pressed-steel stampings.  Paint replaced chrome on the grille and bumpers.  Interiors and seats were simplified and untrimmed without carpets or leather.  Electrical systems were swapped from the usual civilian 6-volt type to the military-standard 12-volts.  Parts such as headlamps were smaller types than the civilian cars and standardised across all models.  Engines were low-compression varieties to allow running on poor-quality petrol.  They were also fitted with parts such as larger radiators and fans, uprated suspension that offered a greater load capacity and increased ground clearance. Taller and wider tyres were used to further improve traction and ground clearance.

The result was a cheap, simple mass-produced small vehicle that could be used for almost any purpose.  The Utilities had an all-up weight of about two tons (2,000kg) and most had a towbar so they could pull a single-axle trailer.

However many were regularly heavily overloaded.  With rarely more than around 30bhp (brake horsepower) available, the 'Tilly' had a top speed of about 50mph when unladen and performance when loaded was poor, especially when climbing hills, while descents could often tax the braking system intended for a much lighter civilian car.  Despite their bigger tyres and raised ground clearance 'Tillies' had only limited all-terrain abilities, being too heavy for their power.  Despite their technical shortcomings they were indispensable for a multitude of military tasks and proved to be reliable and easy to maintain.  'Tillies' were made in the hundreds of thousands throughout the war, even when the Jeep began to prove more useful for some (but not all) of their roles.  Austin production was about 29,000 units until the end of the war.

- Spare tyre with or without canvas cover

- With or without roadwheel cap covers

- With or without tarpaulin cover

- Rear trunk tailgate can be open or closed