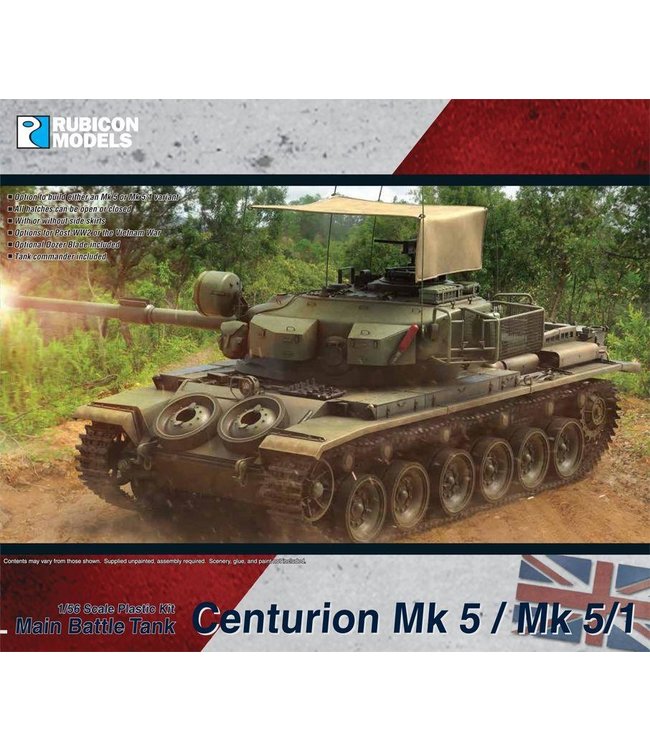 The Centurion was the primary British army main battle tank of the post-World War II period.  Introduced in 1945, it was widely considered to be one of the most successful post-war tank designs, remaining in production into the 1960s, and seeing combat in the front lines into the 1980s.  The chassis was also adapted for several other roles, and these have remained in service to this day.

Development of the Centurion began in 1943 with manufacture beginning in January 1945.  Six prototypes arrived in Belgium less than a month after the war in Europe ended in May 1945.  It first entered combat with the British Army in the Korean War in 1950, in support of the UN forces.  The Centurion later served in the Indo-Pakistani War of 1965, where it fought against US-supplied M47 and M48 Patton tanks. It also served with the Royal Australian Armoured Corps in Vietnam.

Israel’s army used Centurions in the 1967 Six-Day War, 1973 Yom Kippur War, and during 1978 South Lebanon conflict and 1982 Lebanon War.  Centurions modified as armoured personnel carriers were used in Gaza, the West Bank and on the Lebanese border.  The Royal Jordanian Land Force used Centurions, first in 1970 to fend off a Syrian incursion within its borders during the Black September events and later in the Golan Heights in 1973.  South Africa deployed its Centurions in Angola during the South African Border War.

It became one of the most widely used tank designs, equipping armies around the world, with some still in service until the 1990s.  As recently as the 2006 Israel–Lebanon conflict the Israel Defense Forces employed heavily modified Centurions as armoured personnel carriers and combat engineering vehicles.

The South African National Defence Force still employs over 200 Centurions, which were modernised in the 1980s and 2000s as the Olifant (elephant).

Between 1946 and 1962, 4,423 Centurions were produced, consisting of 13 basic marks and numerous variants.  In British Army use it was replaced by the Chieftain.

- All hatches can be open or closed

- With or without side skirts

- Options for Post-WW2 or the Vietnam War