A review of the new Bulge: British book for Flames of War.

With the release of the Bulge British book and miniatures for Flames of War, Battlefront games rounds out their series of late-war expansions for the Battle of the Bulge.

It’s been a long, hard winter for the British as this is the first expansion which the British have had since their D-Day book release which landed in early 2020. By comparison, the Germans have three books, so the Brits are long overdue some love. 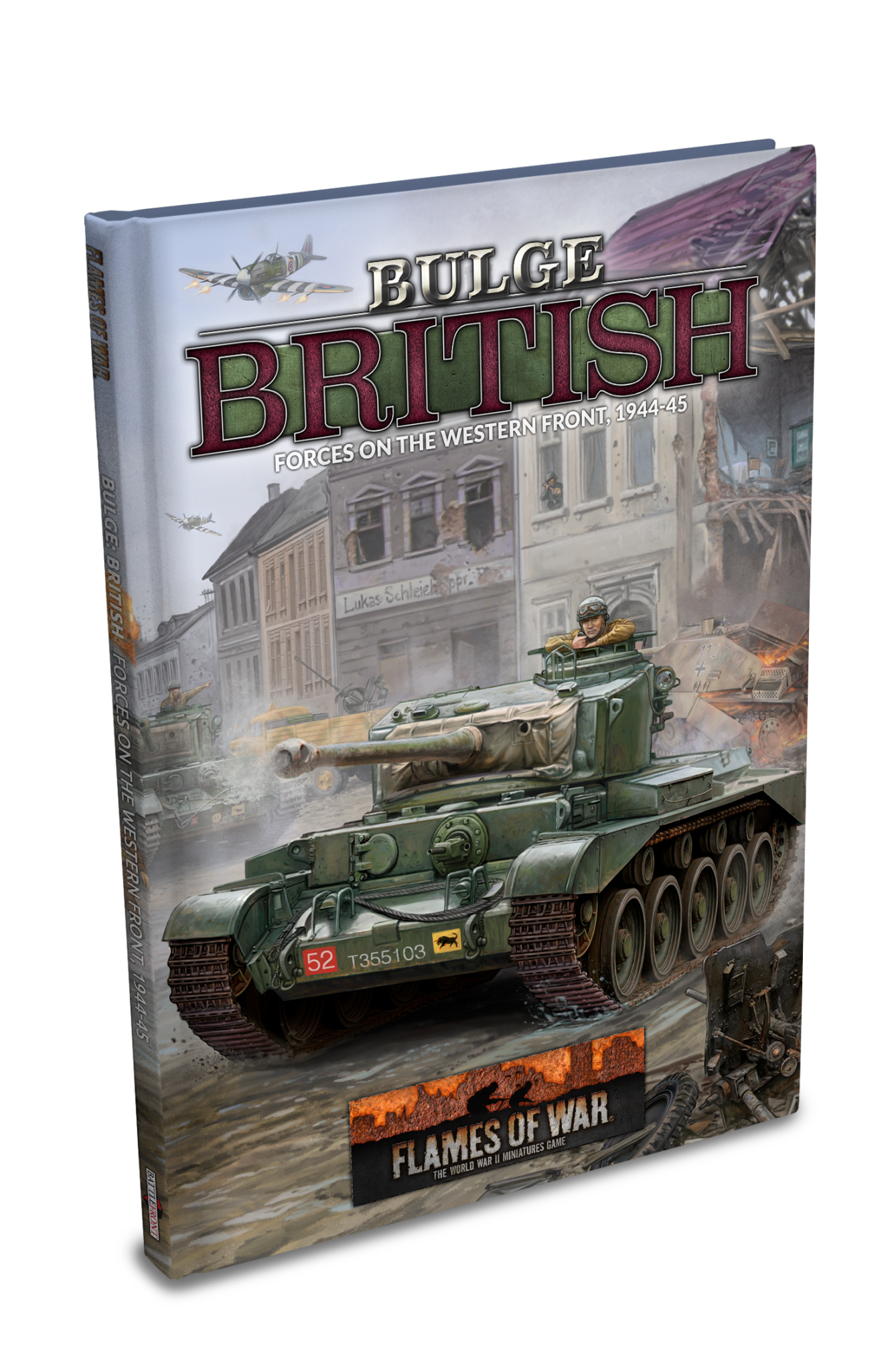 But that’s enough looking back, let’s take a look at what’s actually IN the book… and whether it’s any good!

What’s in the book?

As you’d expect, you’ll find the same cocktail of armour and infantry which came in the D-Day British book including the Cromwell, Churchill, Sherman, Tank Destroyers, Artillery, lots of flavours of Infantry, and aircraft. All the greatest hits are here.

Comet, Challenger, Rams, Land Mattress, Archer, Staghound, plus a new varieties of Paratroopers, Artillery and must more besides. 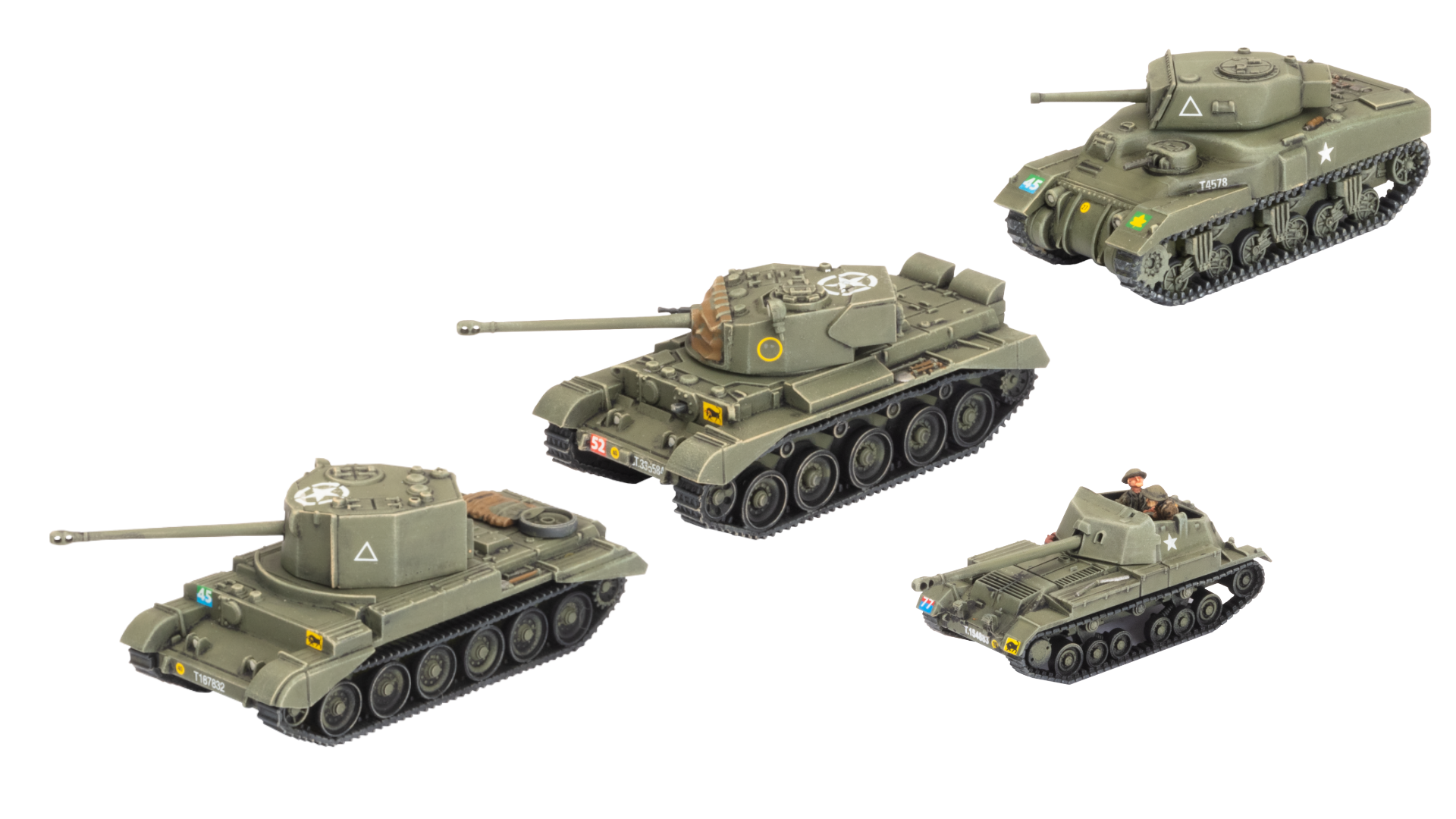 Battlefront keep up the jump to new plastic kits which let you make different types/ loud outs within the same box.

And, as ever, a brand-new book also brings a brand-new starter box… but more on that another day! 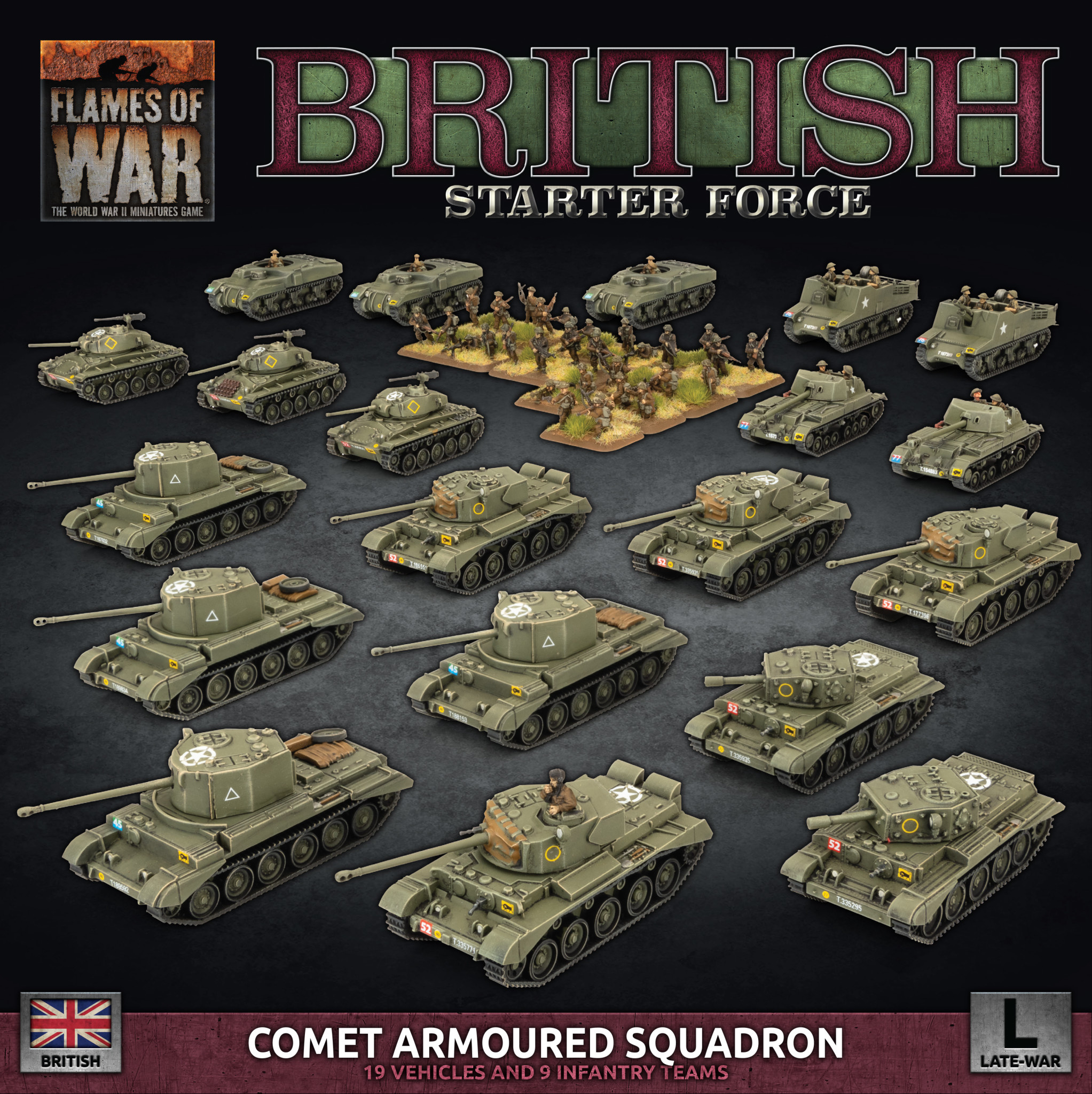 It’s great that we’ve got some new toys on the way, but as with all things Flames of War, how good the book will perform is in no small part down to the formations which are in the book.

Bulge British comes with ten formations for you to use. Of those, six are based around tanks and four are infantry focused. 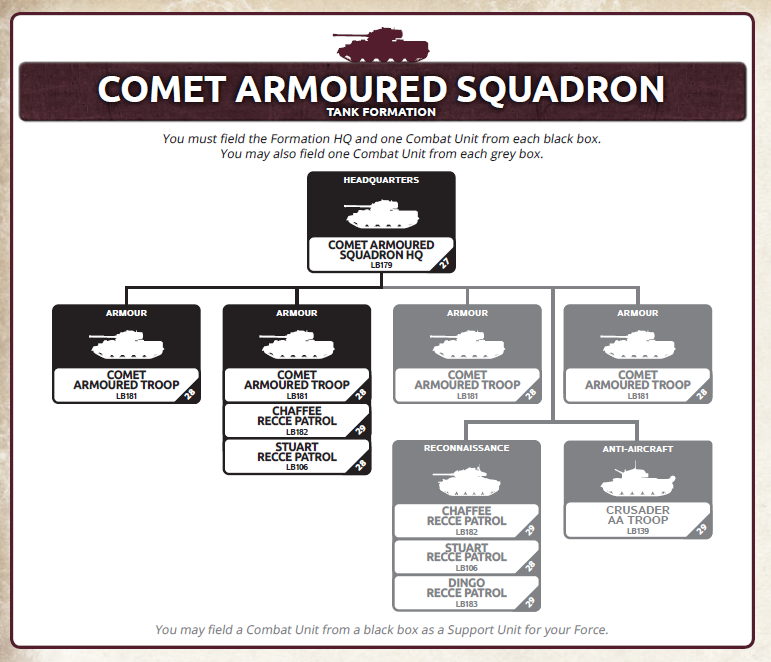 Let’s take a quick look at the first, new and exciting addition to the book, the Comet. The Comet, in case you’ve never had the pleasure, is the final iteration of the cruiser tank, blending light-tank speed, medium tank armour and a heavy tank gun, all in one chassis: 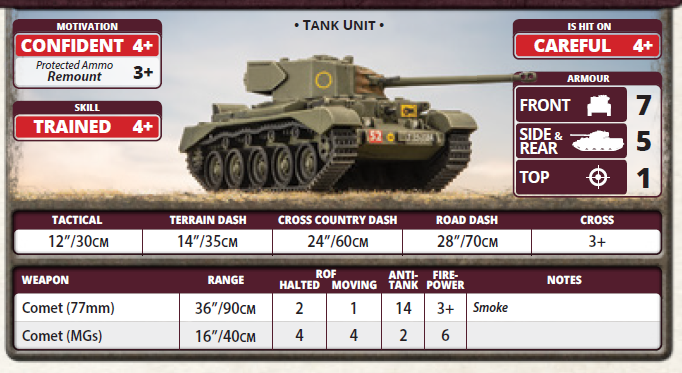 Front armour 7 isn’t going to stop the heavy cats, but will challenge the Panzer IV, the tactical speed of 12” is great and the gun… well, the gun. 36” range with AT 14, 3+ firepower and smoke is very nice which absolutely will give big cats pause. Coming in troops of 3 or 4, with points of 21 or 28 for each, they’re not insanely costly.

This formation with minimum sized options, including Stuarts as the second black box option comes in at 41 points. Not a bad place to start. 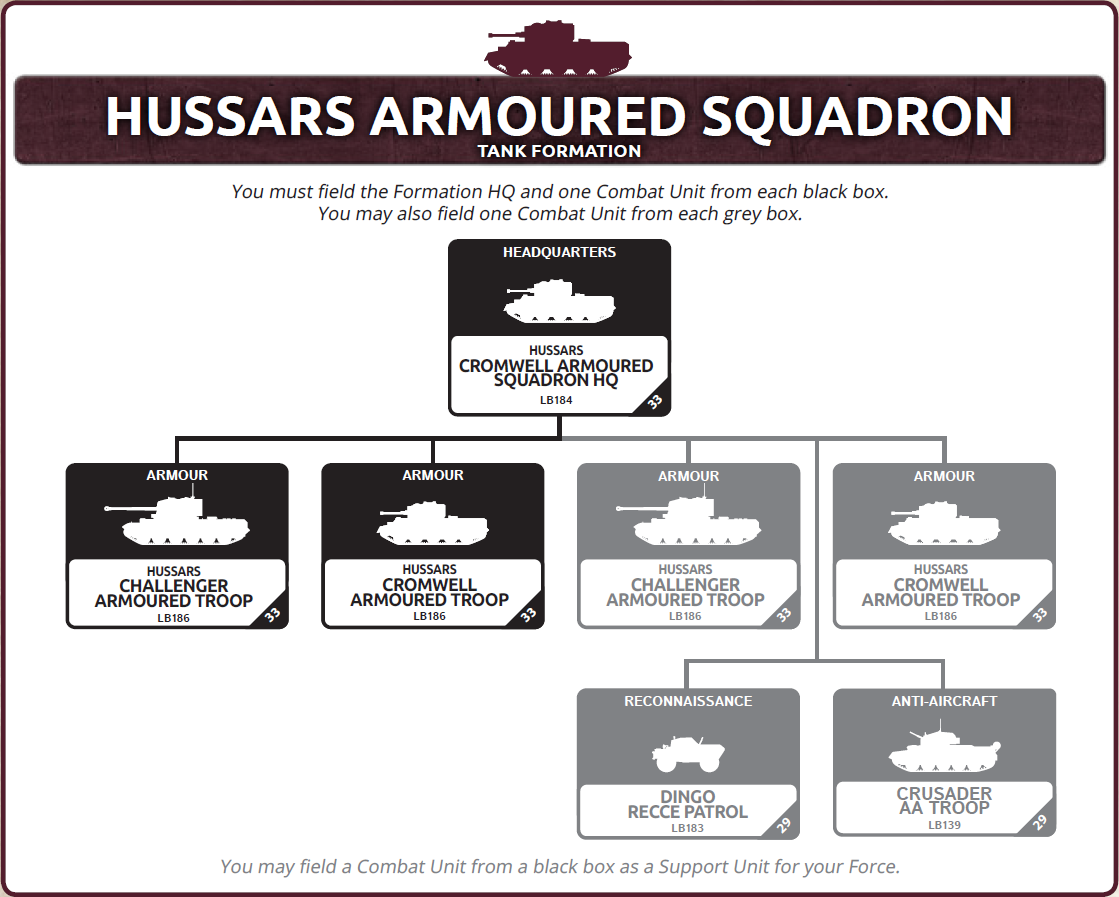 Heavy as it comes, the Hussars Armoured Squadron brings the second big addition to the book, the Challenger. The Challenger is, essentially, an up-gunned Cromwell with worse cross check, no HE and no smoke… for the same point cost as a Comet. 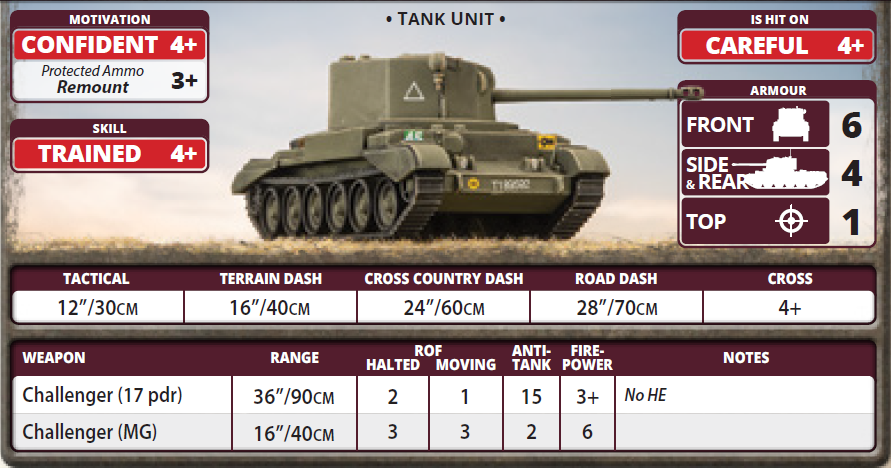 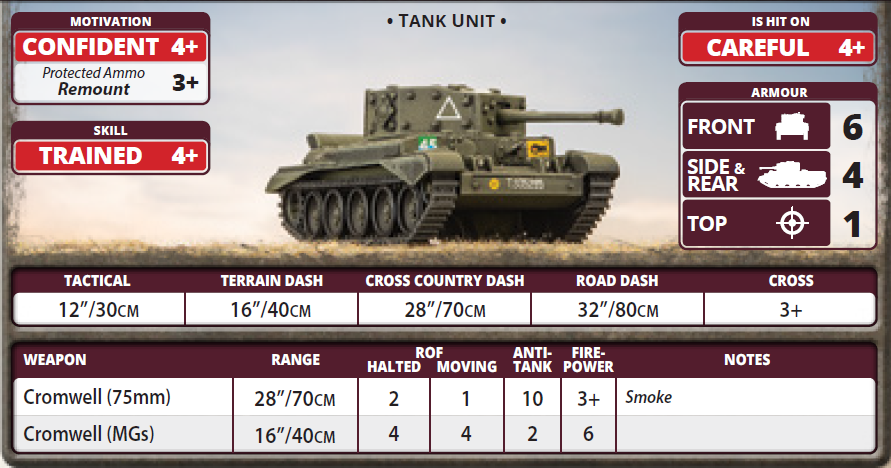 They an awesome addition but would we take them over Comets? Probably not. And with a minimum sized formation of Cromwell HQ, Cromwell Troop and Challenger Troop coming in at 46 points, the Comet is the better option here. 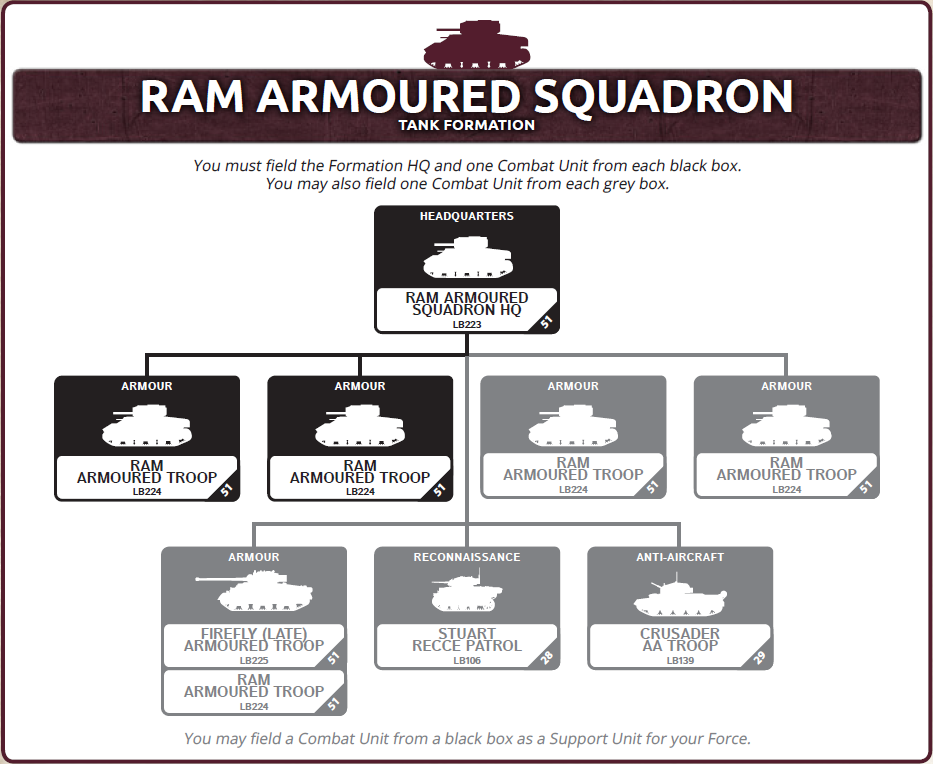 The Canadian Ram is like a lighter, tougher and alternately armed Sherman because… that’s pretty much what it is. Adding a point of side armour and AT, the Ram does drop from firepower 3+ to 4+ by comparison to the Sherman though. But then, for only 4 points a tank, it’s not a bad medium tank… though it won’t have a good time against the big cats. 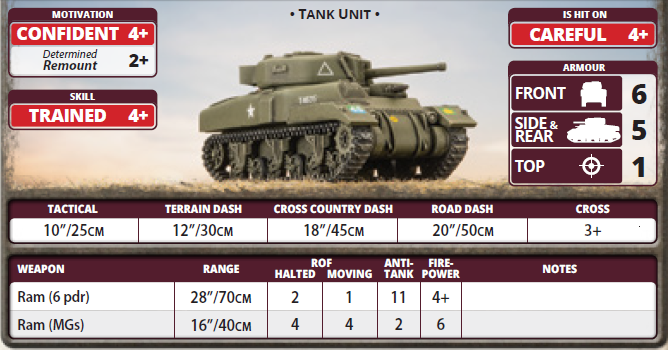 Lacking the flexibility of the Hussars or Comet Squadrons, the Ram doesn’t quite have the same punch, but with a minimum formation costing only 32 points for 8 tanks, they’re pretty cost effective. If you add in a Firefly troop as a formation support, that does push your formation up to 53 points for 11 tanks, which is not awful either and has some big cat worrying AT on the Fireflies.

The last tank formations are the straight Cromwell formation, a Guards Sherman Squadron and a Guards Churchill Armoured Squadron. 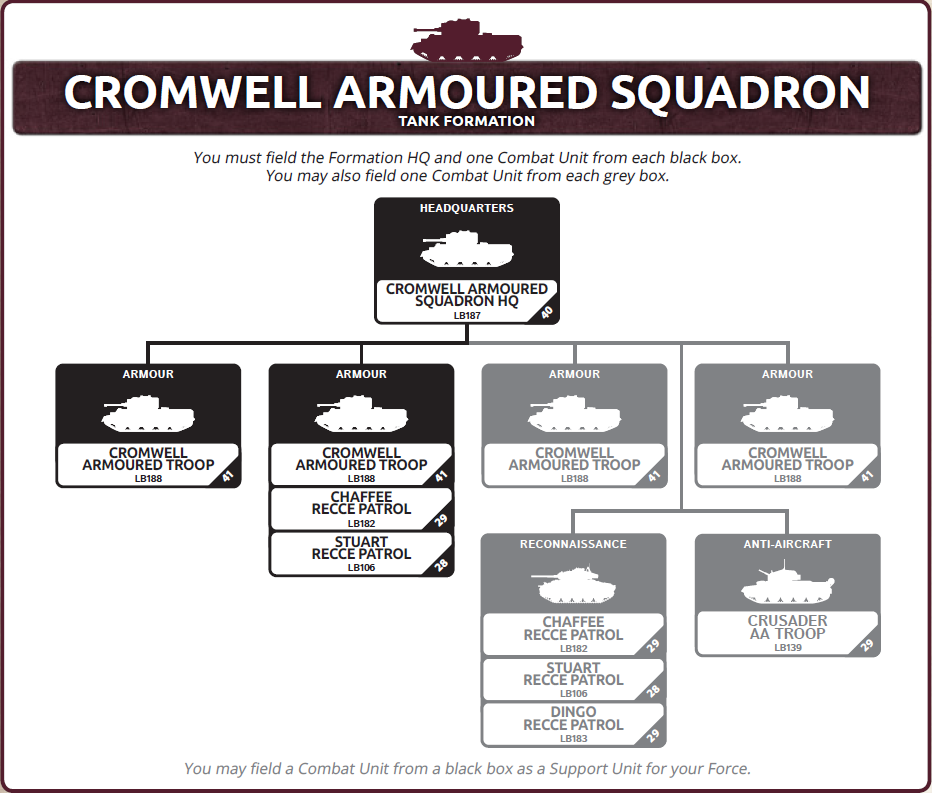 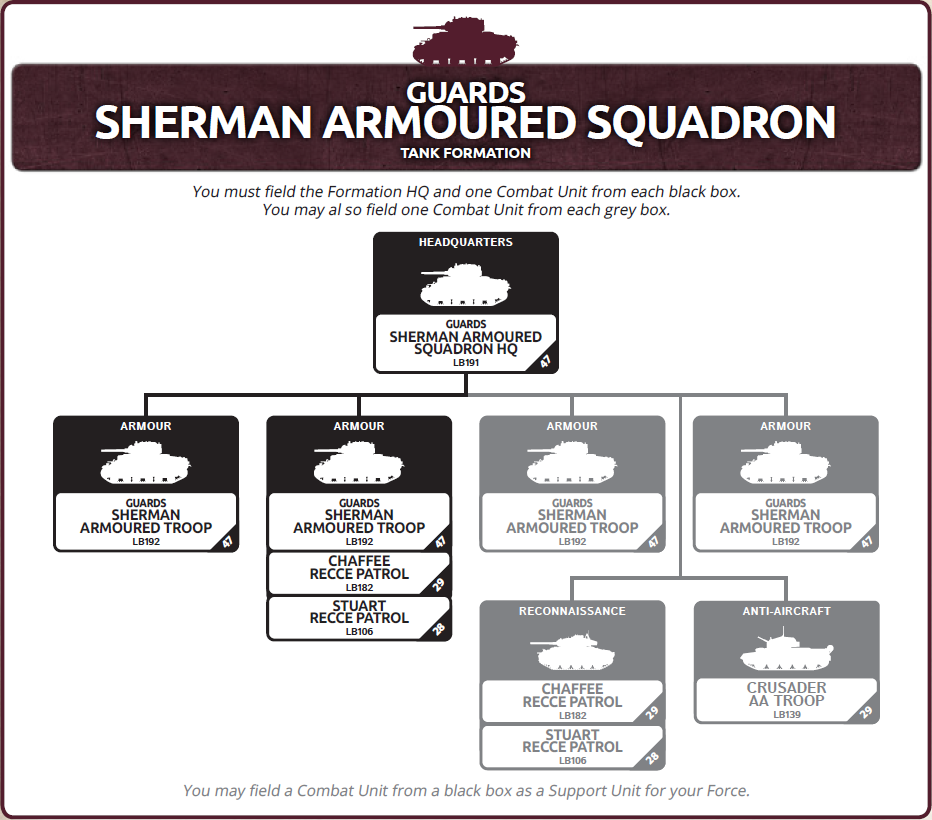 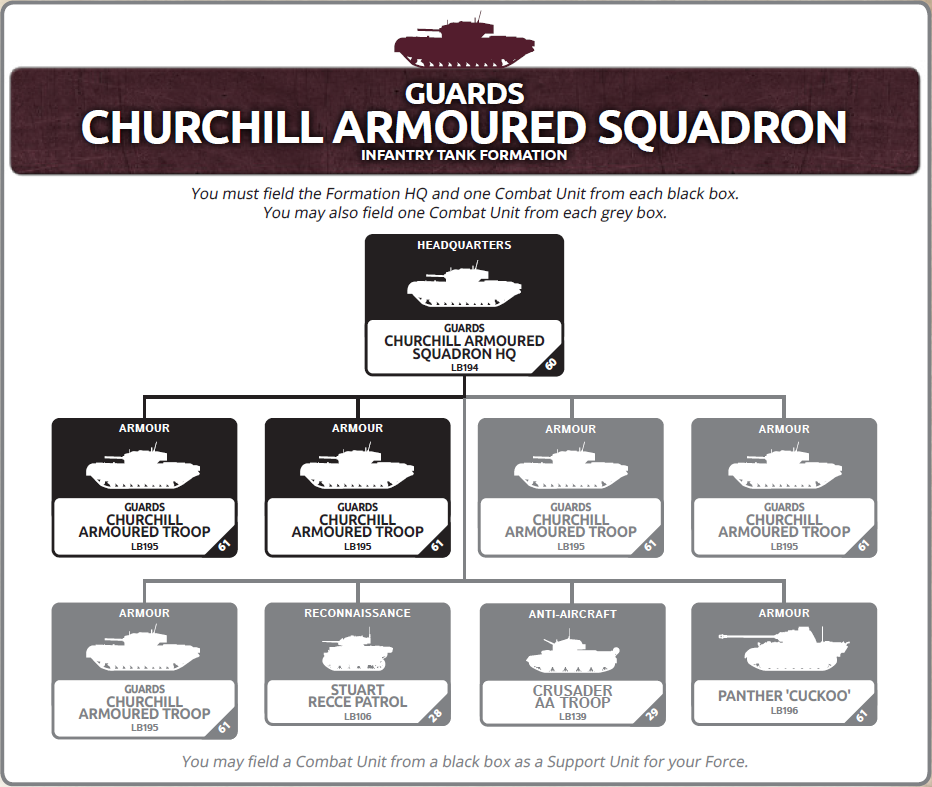 These are fairly standard tank formats with one notable addition to the Guards Churchill Armoured Squadron, a stolen Panther tank! 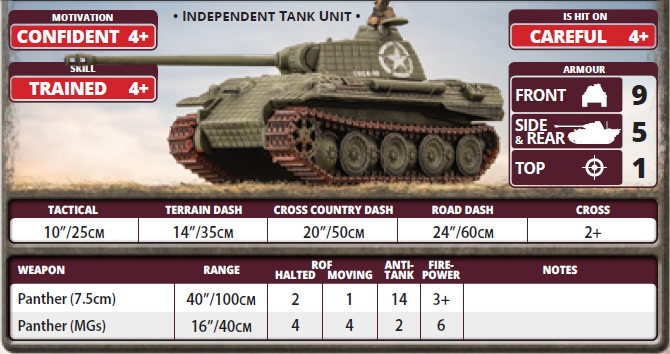 That’s right, you too can field a big cat… just one, mind you… and experience the power of the Panther on the field, but this time for the good guys! Is it worth the 11 points for a single tank…? That’ll depend what else you’re taking, but it might be fun, just to see your enemy’s shock as it rolls on to the battlefield.

Tanks might be all shiny, but it’s the boots on them ground which win battles. Bulge British brings a nice range of characterful units to the game, including some unique options. 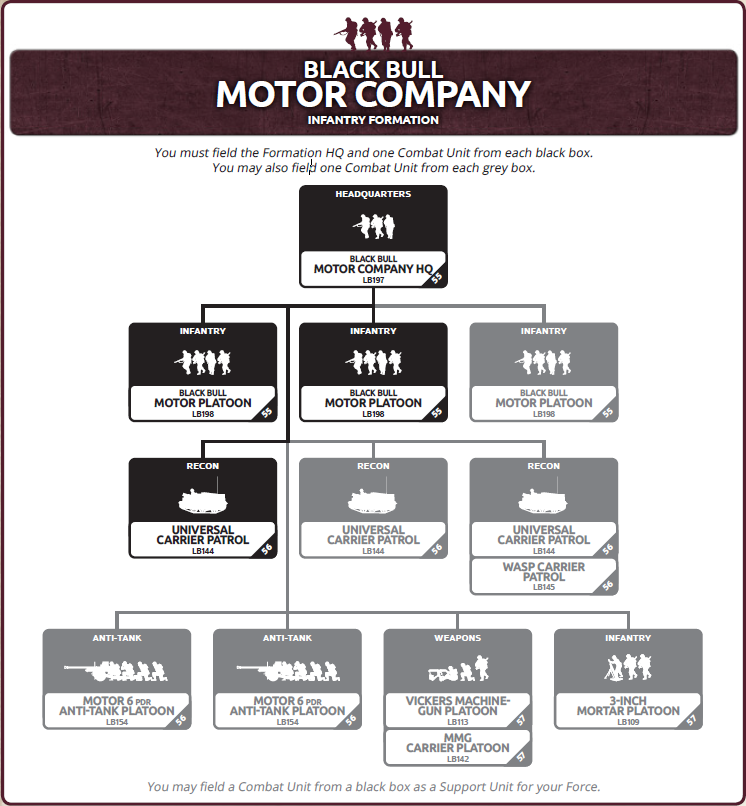 Motorised infantry running around in American M5 half tracks with PIAT, mortar and with the option to add a .50 cal to the M5, you have to admit that these guys are well kitted out!

Their formation can include a mix of Universal Carriers, and 6 Pdr anti-tank guns as well, giving them some mobile support and teeth.

Black box options include the HQ, two Motor Platoons and a single Universal Carrier Patrol, giving this formation a minimum size of four units totalling 14 points with the M5s, not bad for some fairly reliable infantry. 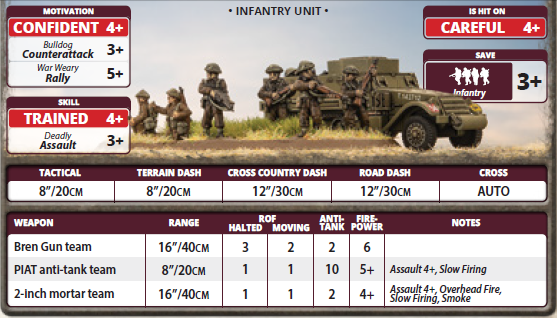 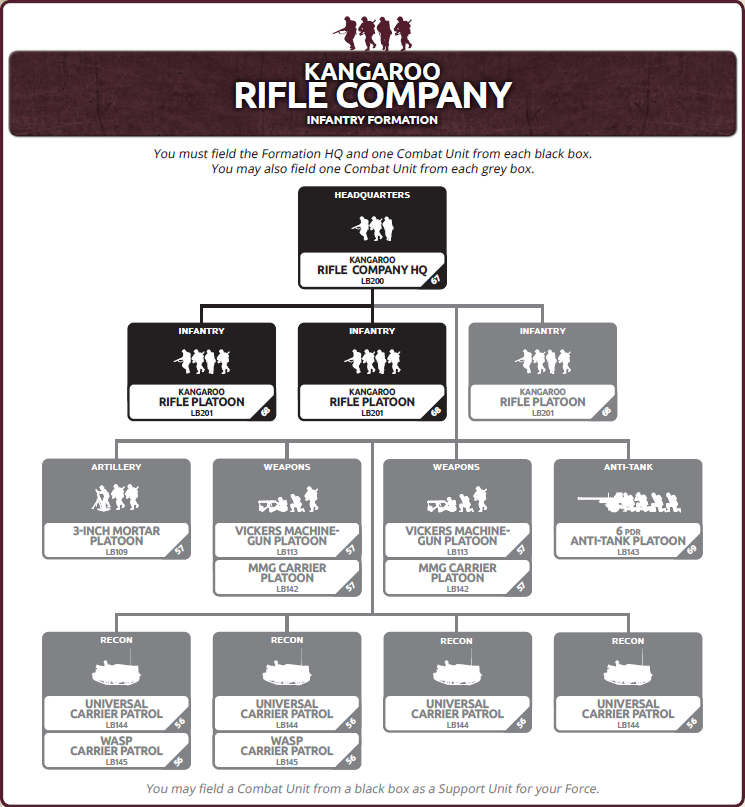 These guys are pretty much the same as the Black Bull but swap their M5s for Ram Kangaroo Transports. For the uninitiated, the Ram Kangaroo is a Ram tank converted to transport by removal of its turret. In practice, this gives a very tough transport which is faster over terrain than the M5, though slower on road and allows the troops within it to join in with assaults. 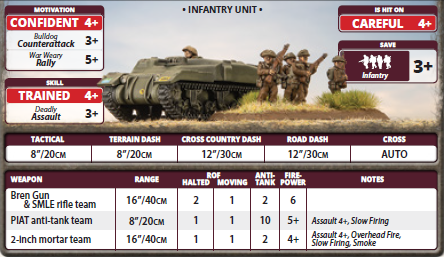 And the points? Basically, the same between the two transports. So, a minimum sized formation of the Kangaroo Rifle Company comes in at 16 points without transports or Universal Carriers. 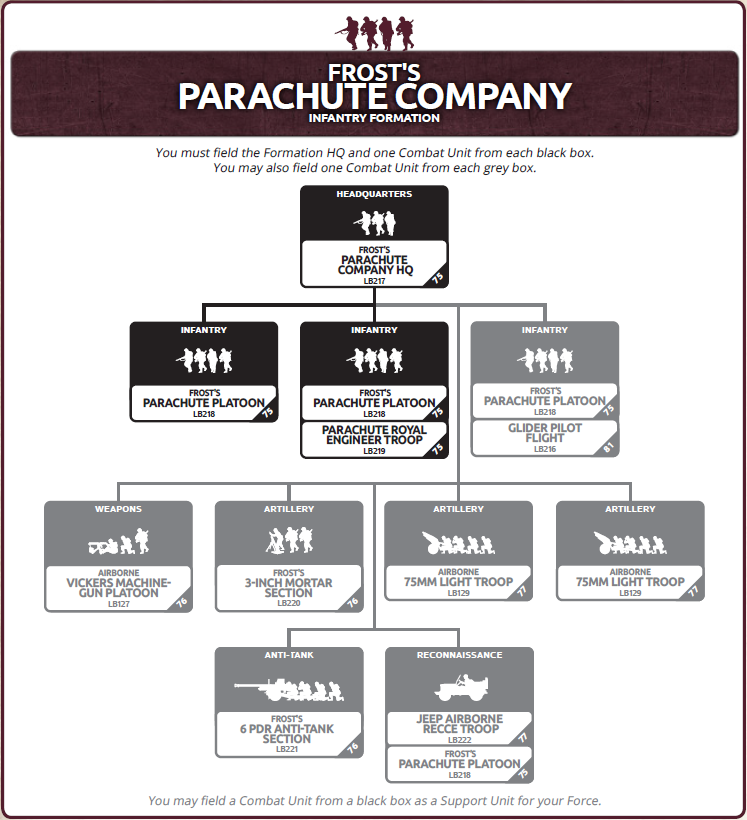 Okay, let’s get this out of the way… no, this formation isn’t from the Bulge, it’s from Market Garden. Frost’s Paras were in action in Arnhem, the Netherlands, in September 1944. But they’re in the book, so we’re talking about them!

Trained, motivated but lightly equipped, the Paras are a potent infantry formation, but will need support from heavier units if they face heavy armour. 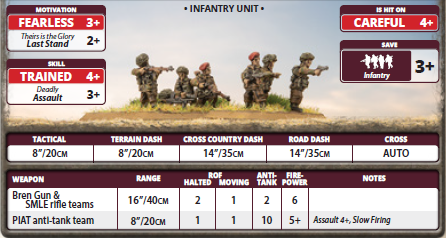 A nice touch to this formation is the Jeep Airborne Recce Troop. Coming in at 2 points for 2 Jeeps, 3 points for 4 or 6 points for 8, this grey box option gives you a cheap little spearhead unit which can really help the Paras move up fast.

At minimum size of one HQ and two Platoons, this formation starts in 17 points for your black box options. With their skill and motivation, these are a steal! 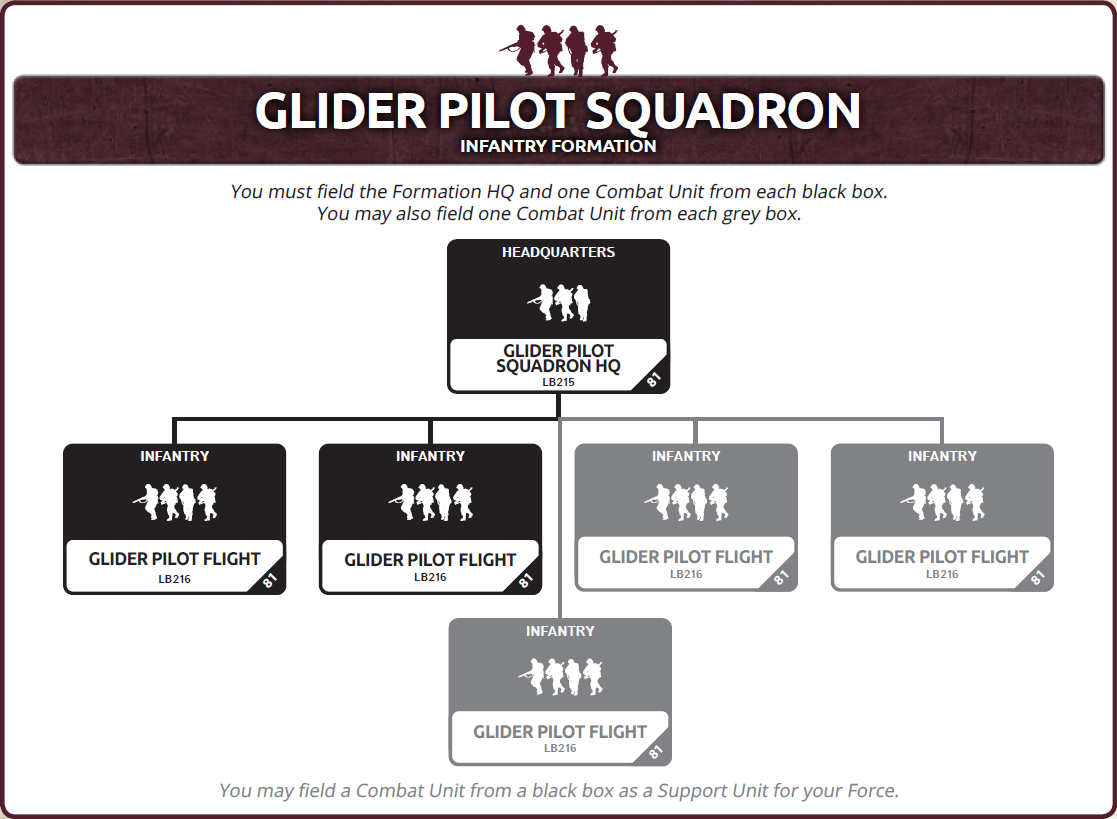 So, you want something fluffy, do you? Why not a lightly armed formation made up of glider pilots? Well, if that sounds like your kind of thing, we’ve got good news for you… 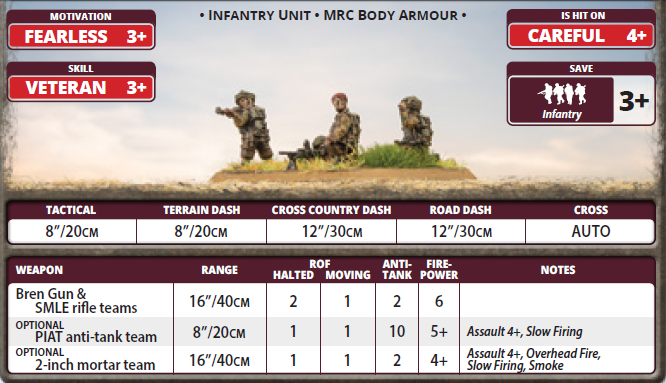 Literally a pure Infantry formation, but with some pretty good skill and motivation ratings, this formation starts at 19 points for a nicely reliable force. Just know you WILL need more firepower to deal with tougher customers.

We all need friends:

Flames of War is not just about your formations, but also the support options you take with them. Thankfully, there’s a great array of interesting and unique support options in the book. We won’t spoil them all, but ones which we think are worthy of note, whether for quality or novelty, include:

If you looked at the jeeps in Frost’s Parachute Company with envious eyes, fear not! You can field 3 jeeps of your own, and not just any jeeps, SAS jeeps for only 3 points and choose from a range of weapon upgrades too. 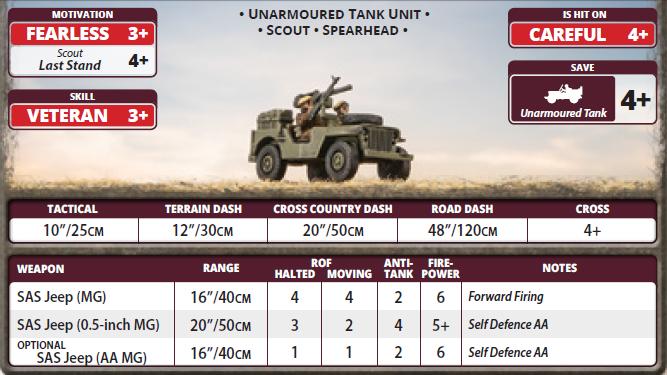 Fancy some unpleasant anti-tank options? Well, look no further. The M10 options for the Brits include a monstrous 17 pdr option which delivers an unpleasant dose of AT 15 fun to your enemies when and where you need it. 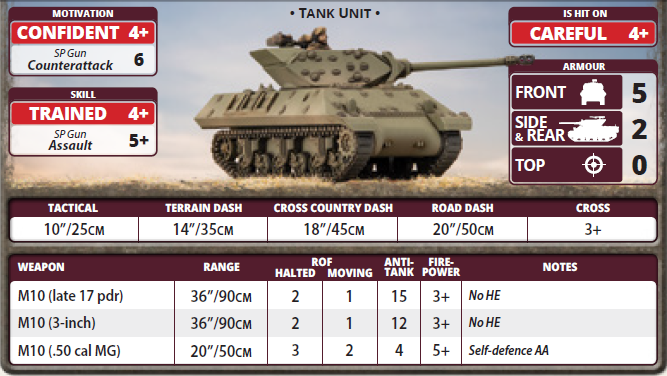 With a gun so big that it’s mounted pointing backwards, the Archer is a bonkers machine with AT15 on a pretty mobile platform. In practice, the Archer is a lighter armoured M10, but it’s also a lot smaller and just cheap enough that it MIGHT be worth taking.

Land Mattress Rocket Troop
Lives up to its name, in appearance anyway. The land mattress is a truly devastating bombardment weapon, delivering massive, long ranged hell onto the heads of your enemies. However, they’re far from cheap, with a minimum troop of two costing 8 points.

Overall, the Bulge British book provides some very interesting and unique options for British forces in a long overdue update.

You can find all of the Bulge British goodies available for pre-order on our site right here today!