Let’s start with the things you want to know… First, the only thing bigger than this book is the armour it contains. Clocking in at nearly 130-pages, it’s bigger than Bagration by 25 pages, and each one is awesome. There’s a lot of unique, interesting formations and units in here, even if you’ve got the other books already.

Let’s start with the things you want to know… First, the only thing bigger than this book is the armour it contains. Clocking in at nearly 130-pages, it’s bigger than Bagration by 25 pages, and each one is awesome. There’s a lot of unique, interesting formations and units in here, even if you’ve got the other books already. 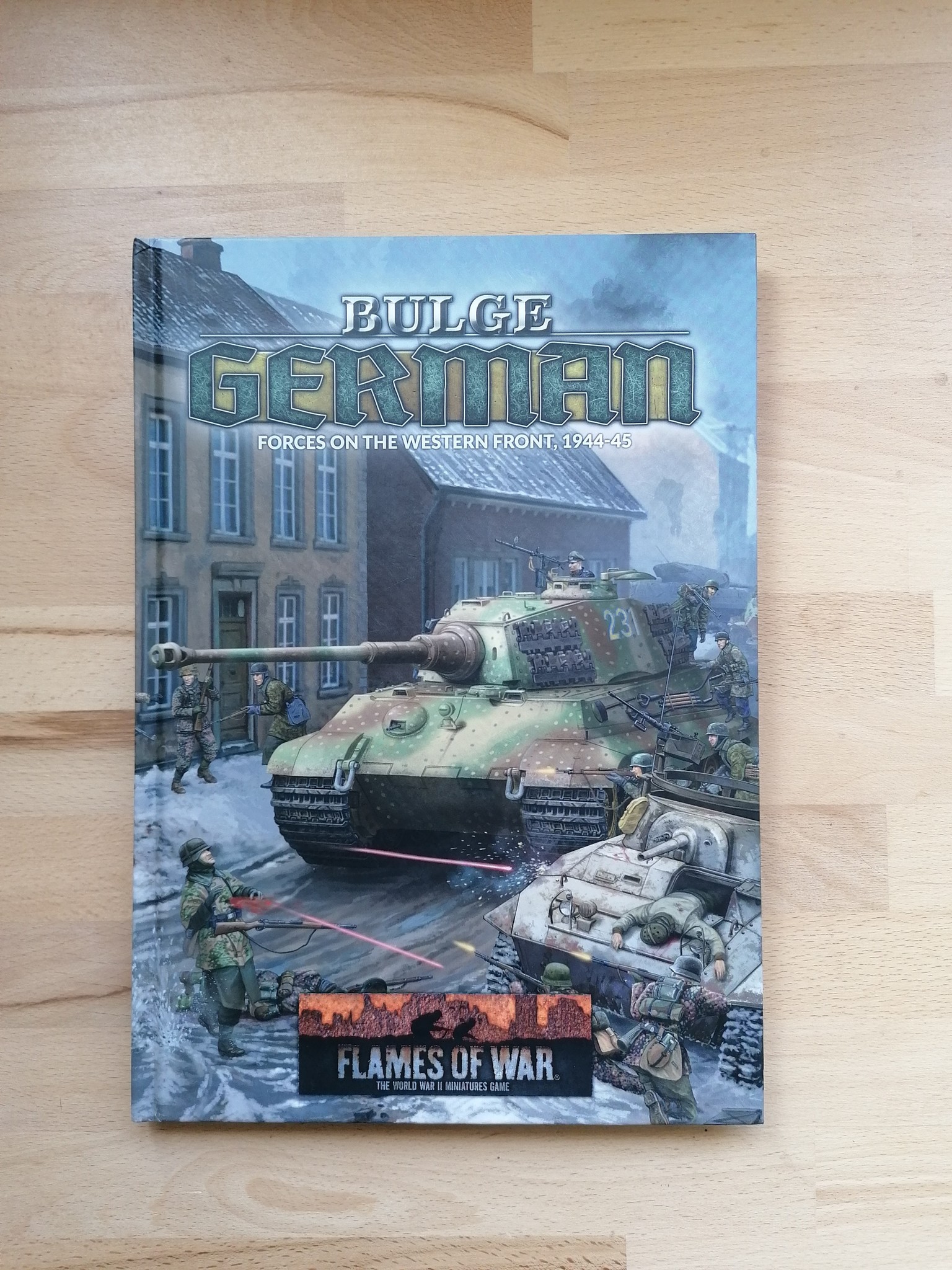 But is this a good book? Not if you’re an allied player (it’s awesome if you’re a German player though).

((Even though the US Bulge book was pretty tasty, check our review here if you missed it here.

Are we getting new plastic kits? Yes, yes, we are. And they’re pretty. And there are many.

If you play Germany in Flames of War, should you buy this book? Yes. Pre-order it today. Really.

Yes, even if you’re a new player.

Before we dive into the meat, let’s answer the burning question EVERYONE has… 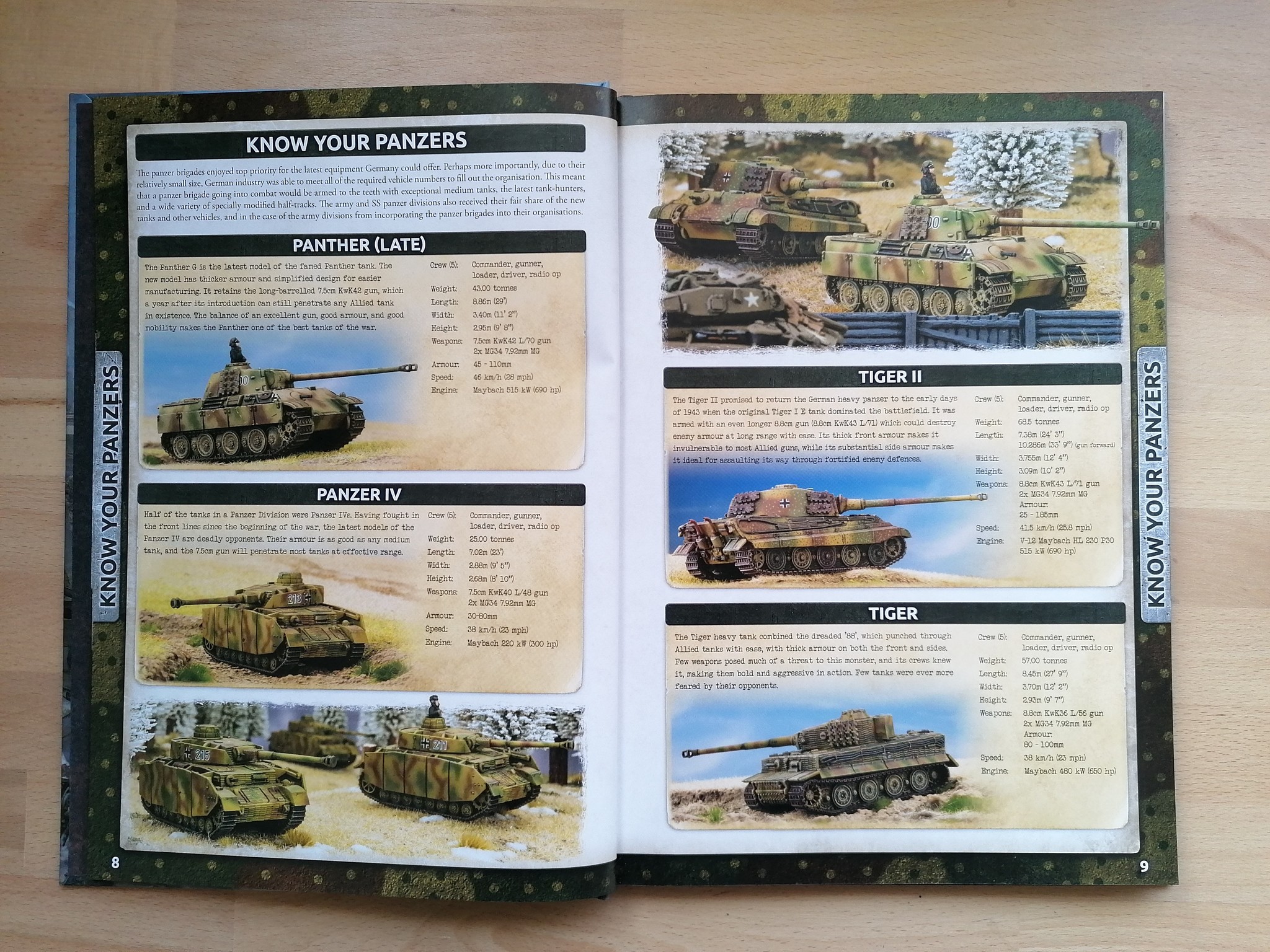 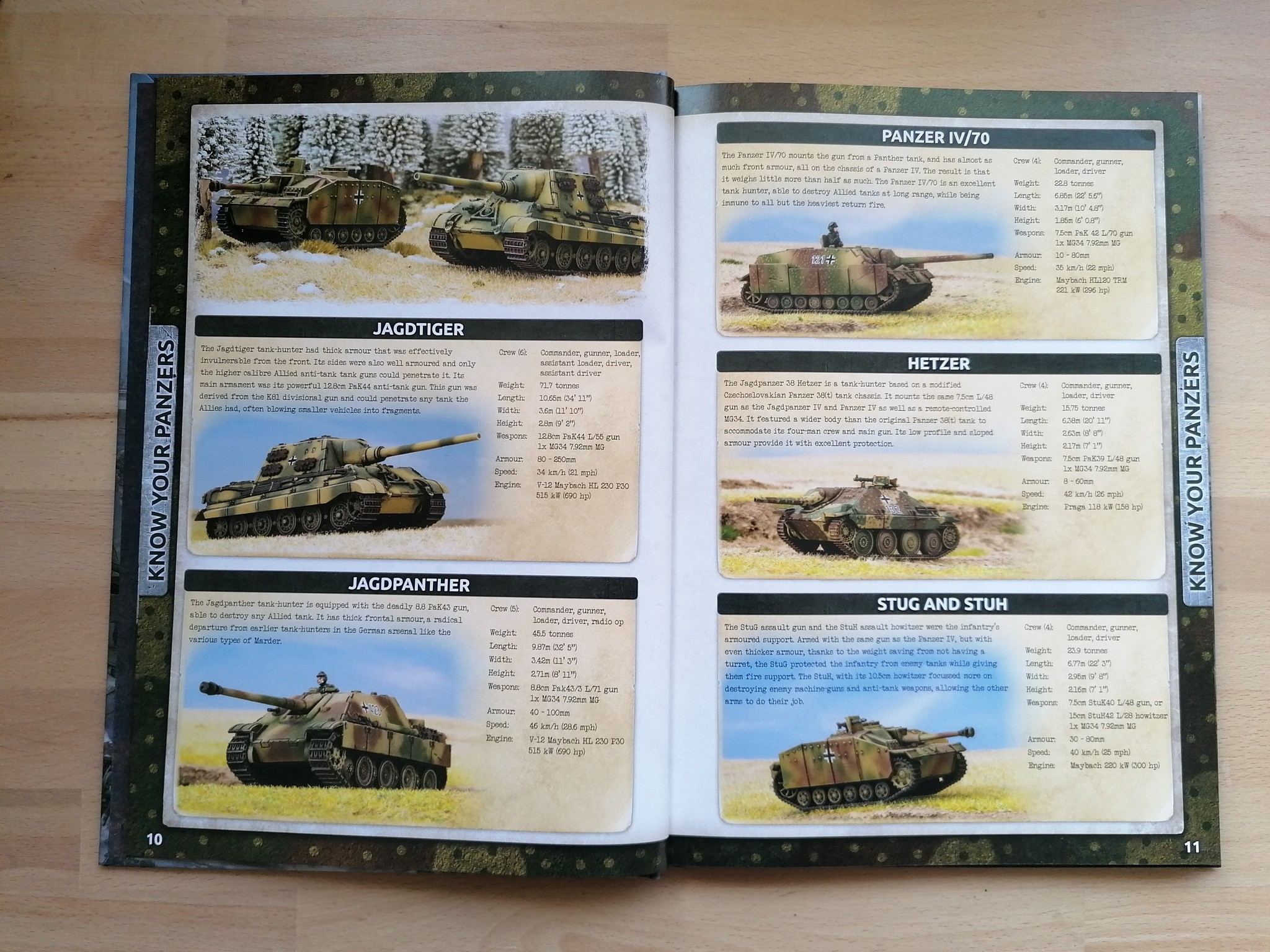 Told you it was big. 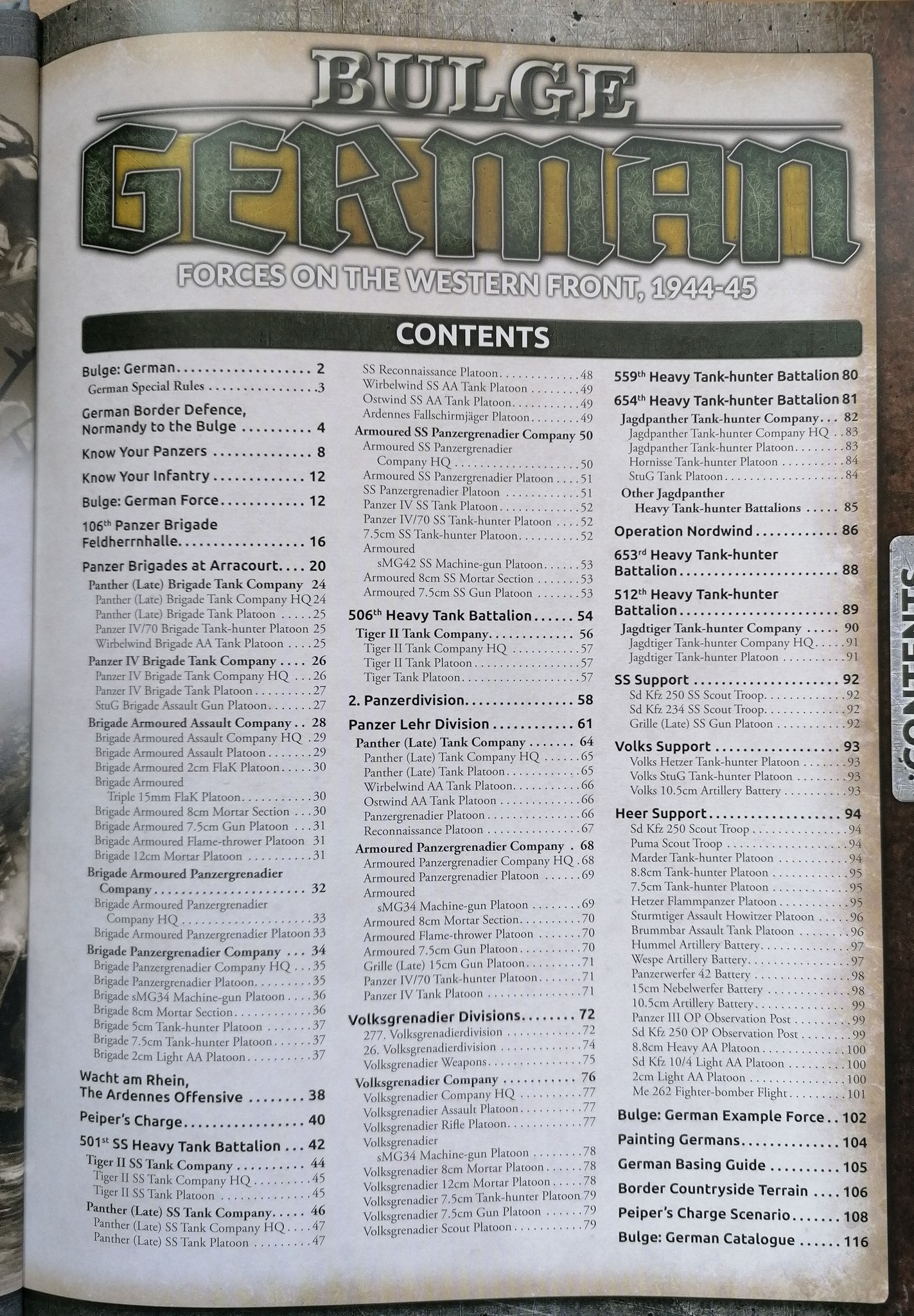 With all of that to run through, we’re going to pick out our favourite formations, AKA the formations we KNOW you want to see…

Let’s start big. The Tiger II. Front armour 16 means that even the AT 18 gun of the American Super Pershing is going to have issues with this beast from the front. Whilst return fire from the Tiger II’s AT 17, fire power 3+, 48” range main gun is going to be an issue for the big yank. 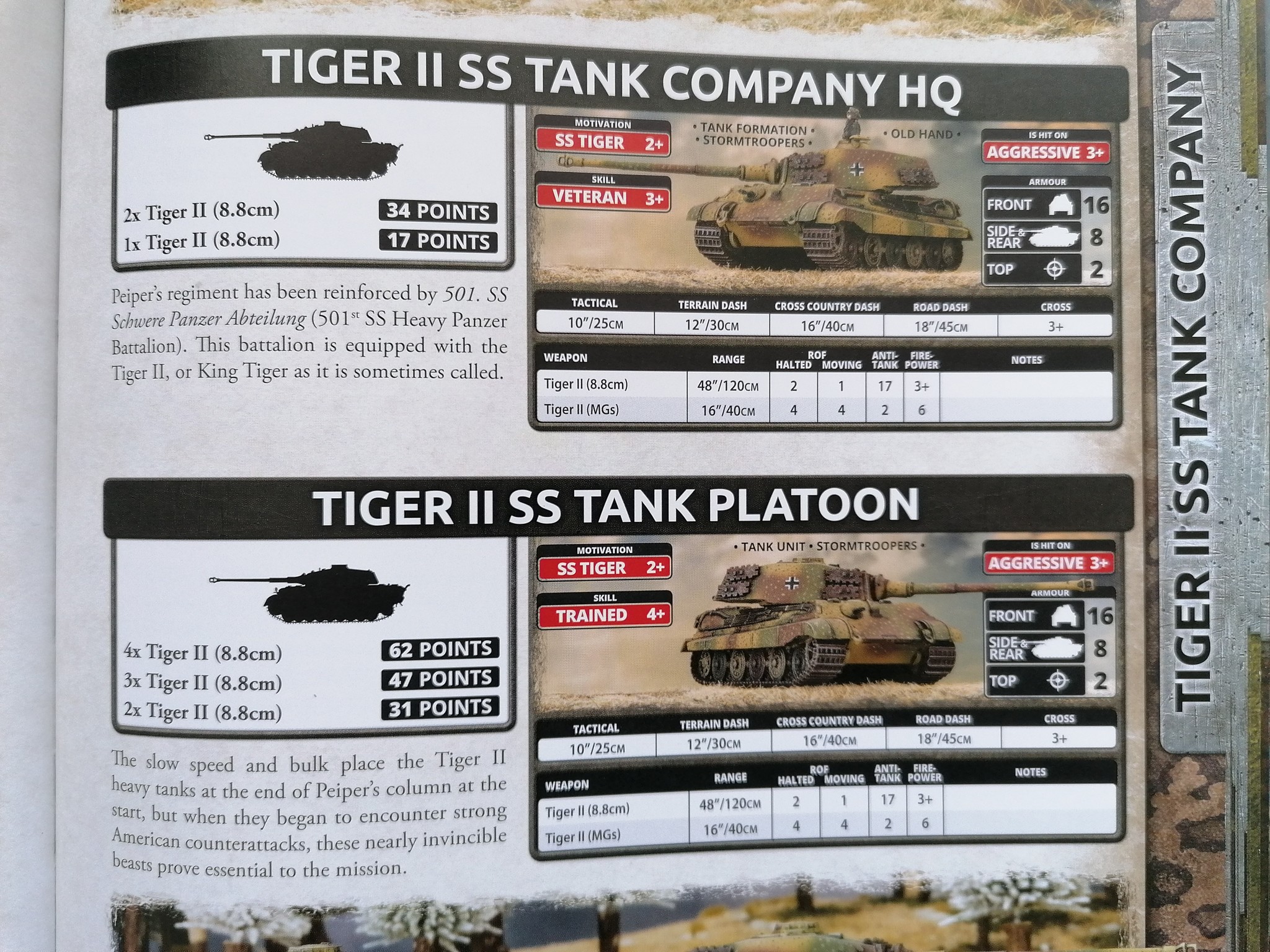 The company also have the option to take a Wirbelwind or Ostwind AA platoon too.

So, you can do combined arms with the Tiger II formation. In fact, taking the cheapest option on the HQ and first two platoons, (1 x Tiger II HQ, 2 x Tiger II and 3 x Panthers) comes in at 76 points. Which does leave you some space to add in good support, if you don’t mind having most of your points in six tanks! 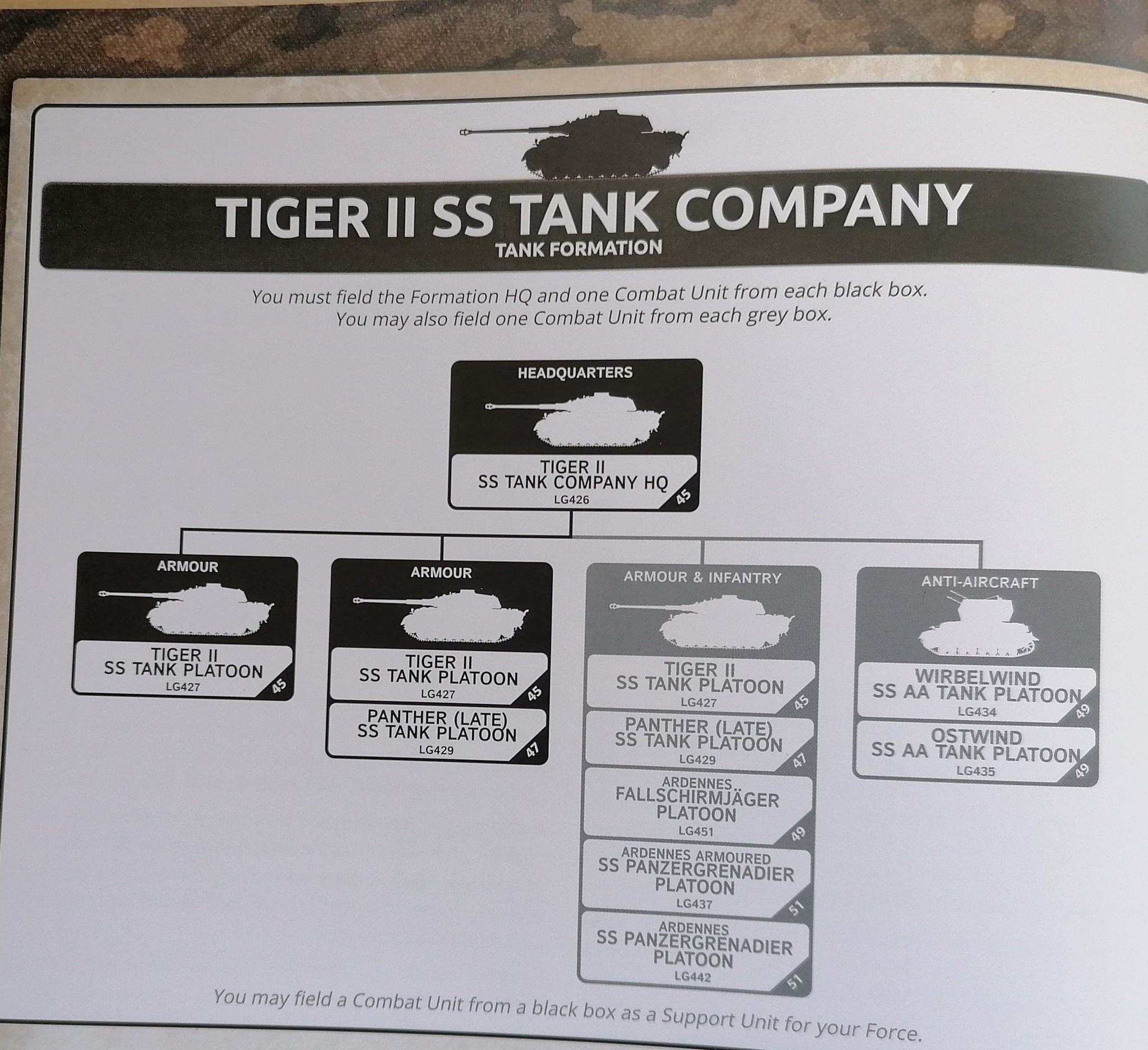 If you’ve ever looked at the STuG and thought “that’s great, but I want more”, then this is for you. Front armour 9, 3+ cross check, hit on 4+ and with 3+ skill, the Jagdpanther starts well. 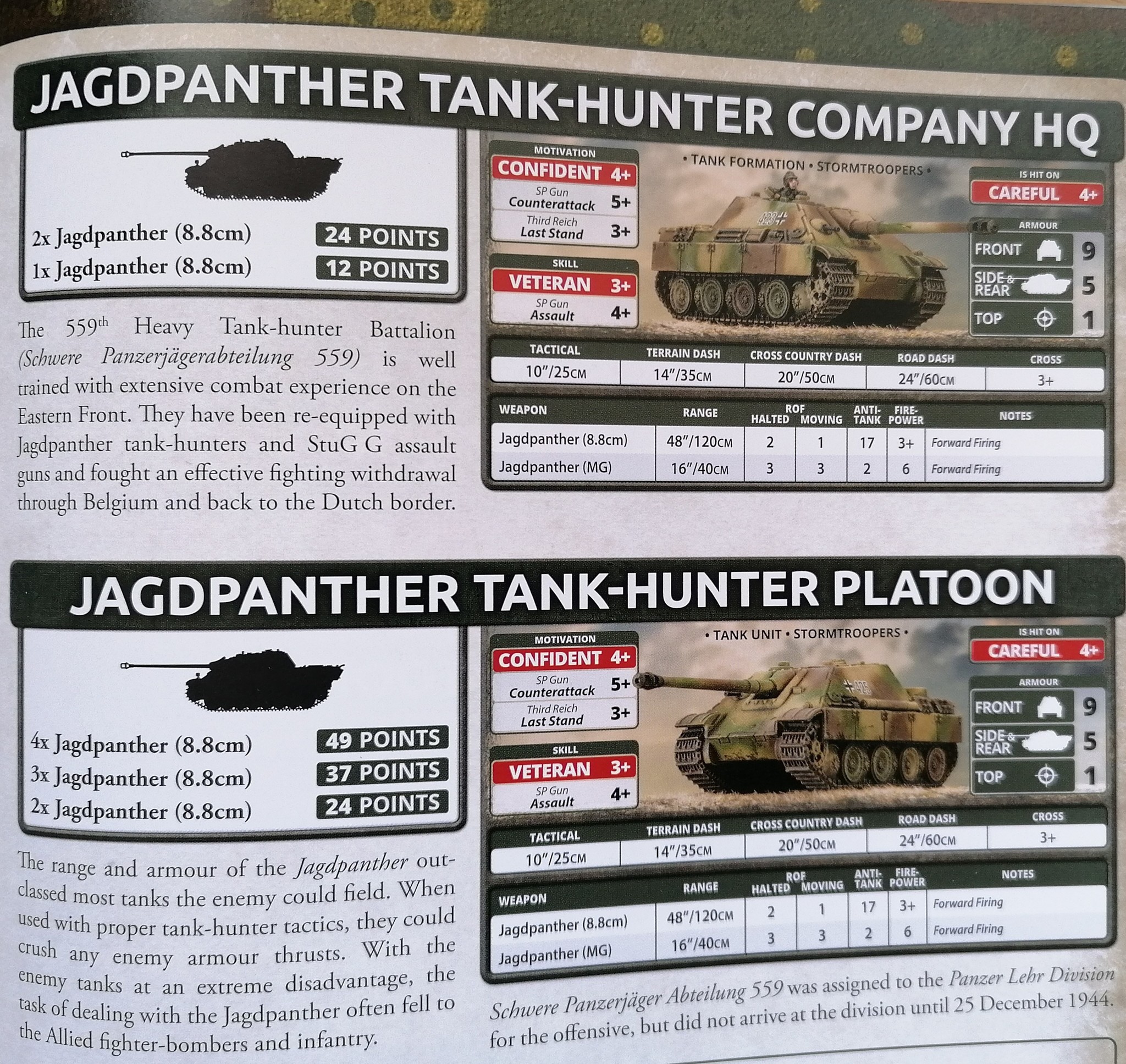 The formation itself brings a Jagdpanther HQ and Jagdpanther platoon as the core. Your second platoon can pick from a Jagdpanther, Hornisse, panzer IV/70 or STuG platoon.

If you want to go all out, you can run 8 Jagdpanthers for 98 points… so, that’s a thing. 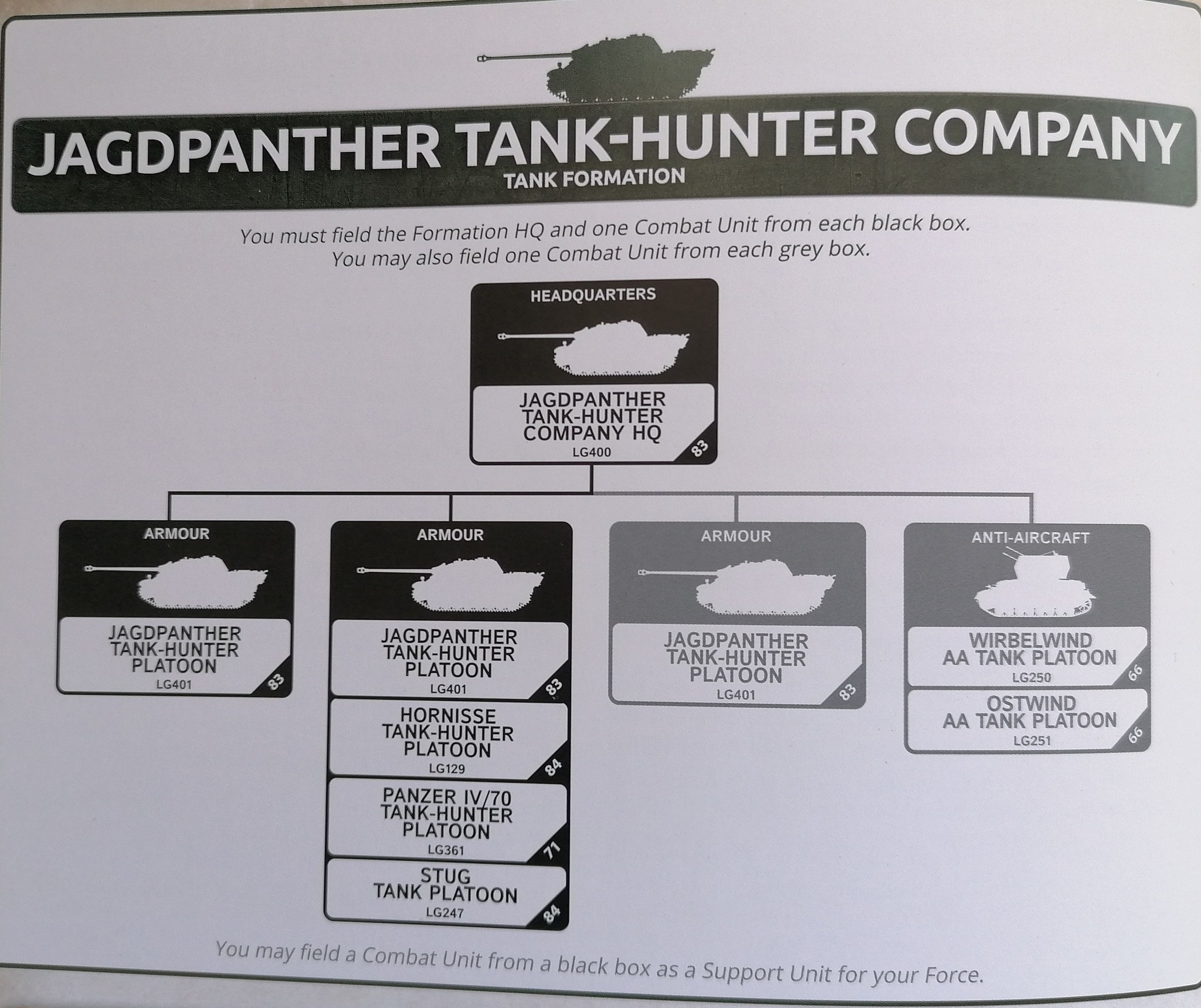 As with the Tiger II, you can also bring some AA cover in the form of a Wirbelwind or Ostwind AA platoon too.

If you’ve ever looked at the Jagdpanther and thought, “that’s great, but I want less friends”, then this is for you. Front armour 17, 3+ cross check, hit on 4+ and with the same 3+ skill as the Jagdpanther, Jagdtigers are just not friendly!

But that’s not bad enough, what they really need is a horrific gun and, thankfully, the 12.8cm gun fits the job. 48” range, AT 18 and with a 2+ firepower. You’ll also be forcing rerolls for infantry, gun, and unarmoured tank teams with the brutal rule. Though, on the downside, the weapon is slow firing!

Jagdtigers are also pretty slow moving with an 8” tactical speed and 16” road dash, you won’t be going anywhere quickly. 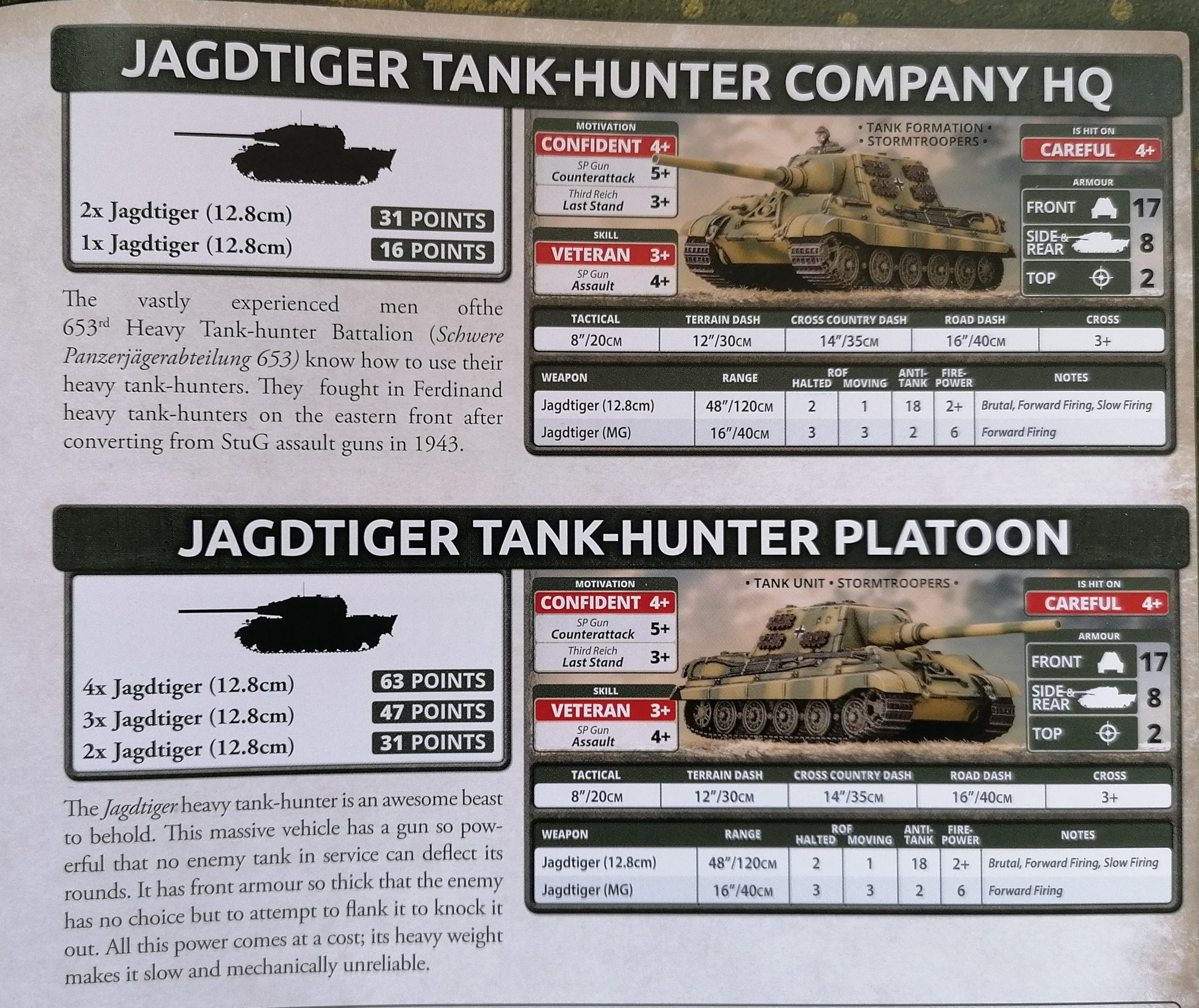 As with the Jagdpanther, the formation requires Jagdtiger’s in the HQ and first platoon, with the second platoon having Jagdtiger, Panzer IV and STuG options. 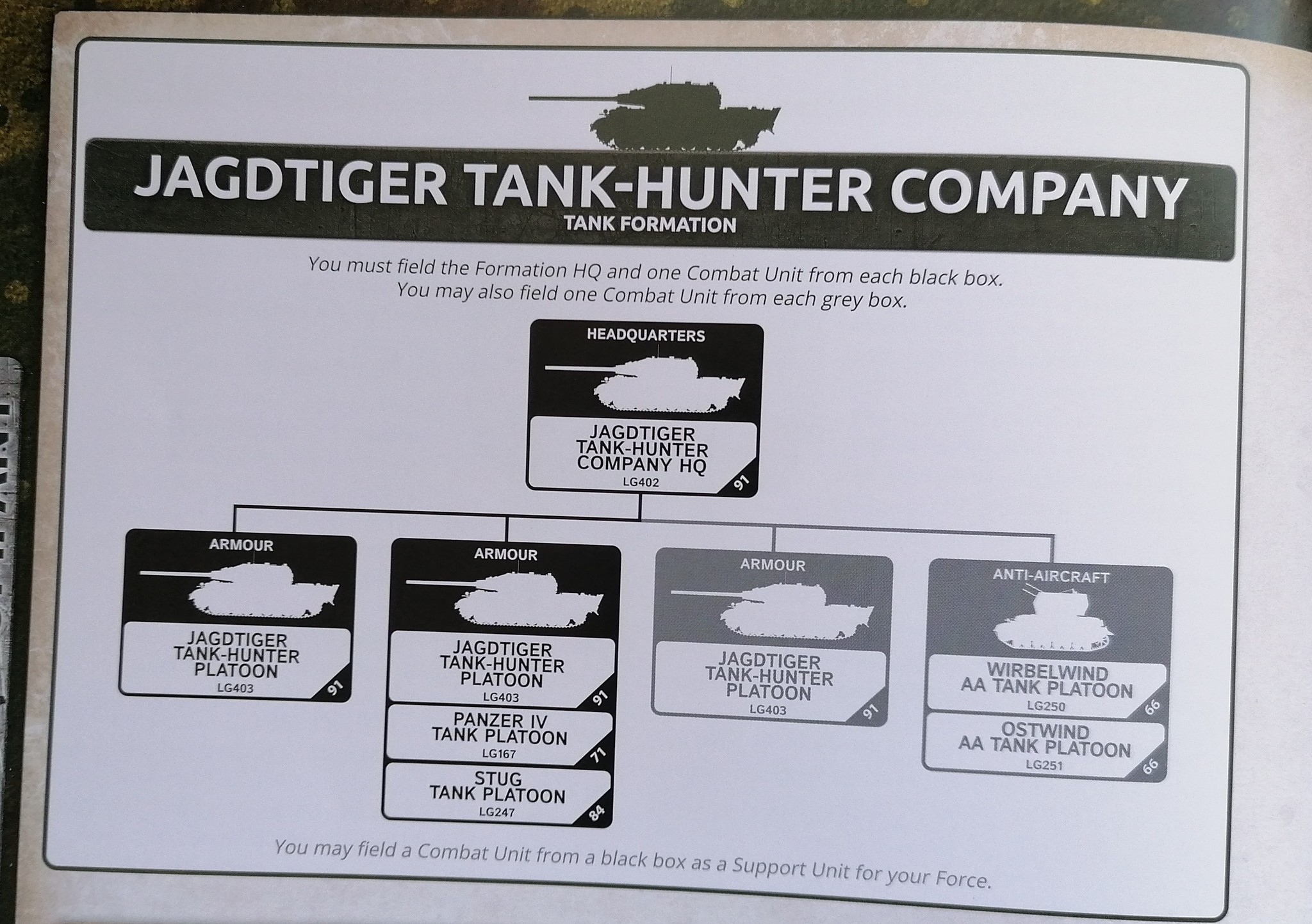 With the minimum unit size of one for the HQ and two for the platoon, you COULD fill out your compulsory slots with Jagdtigers for “only” 78 points and giving you five tanks. Still, there’s 22 points left over so you could try it!

Again, you can bring some AA in the form of a Wirbelwind or Ostwind AA platoon in the core formation (if you have the points!). 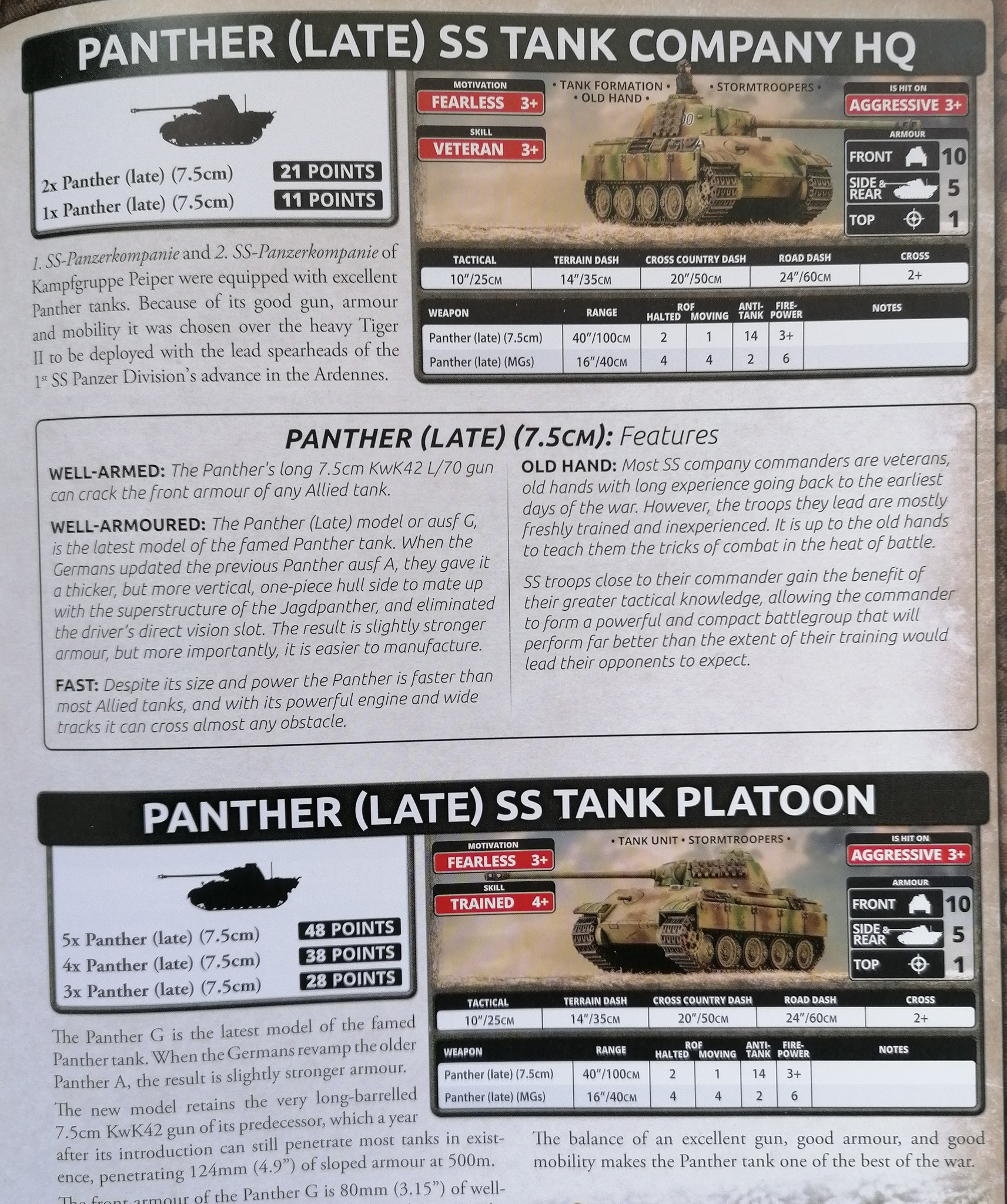 The mighty Panther has gotten some love in Bulge, for about one point per tank, the front armour has gone up from 9 to 10. Not awful. The rest of the Lehr stats are as awesome as ever with 4+ “hit on”, 2+ “cross check” and 3+ fire power on the AT 14 main gun. 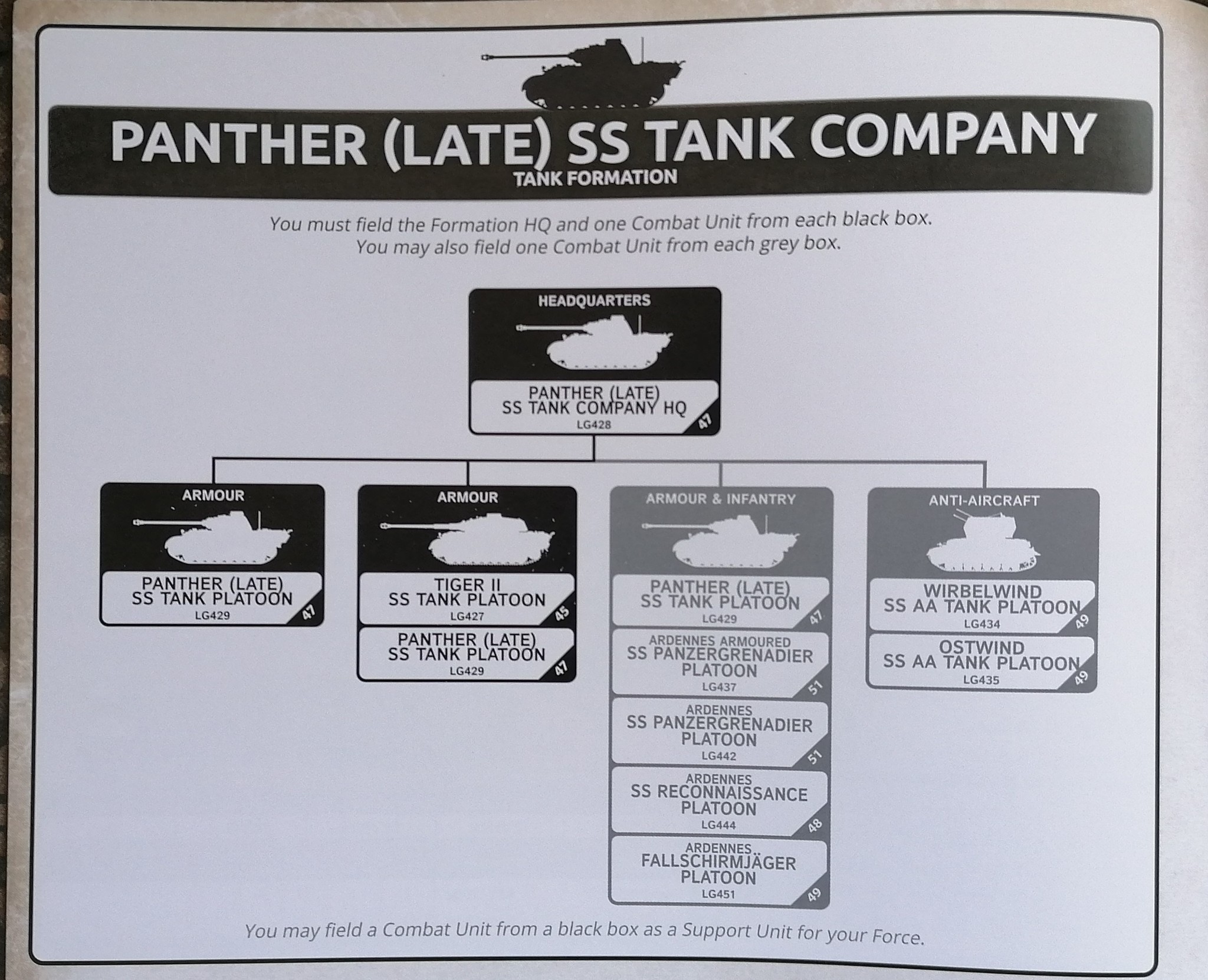 As a minimum, the HQ and two tank platoons would come in at 82 points for seven tanks, leaving you plenty of room for support and some infantry support.

Don’t worry, there’s more to Bulge than armour, you’ll also find some pretty unique infantry. One of our favourites is the Volksgrenadier Company.

Well, these guys bring the StG44 Assault Rifle, and Panzerfausts as standard. The StG44 gives your infantry ROF 3 on the move. You can also add in Panzerschreck teams into your platoons as well, just to make them extra spikey.

You can choose between Assault or Rifle platoons, which add in MG42 or K98 options to each platoon, respectively. 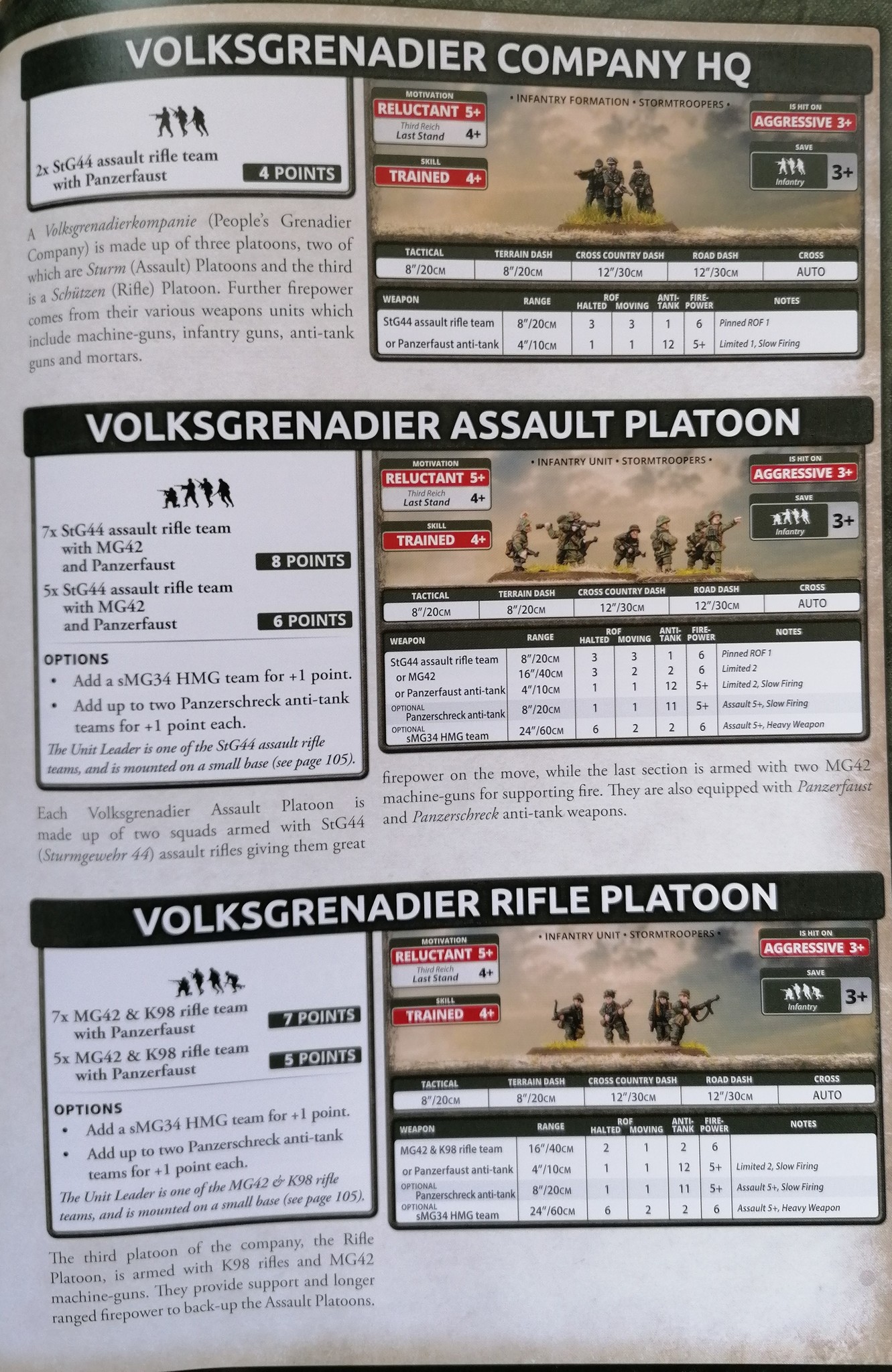 The formation includes options for 8cm mortars, sMG34 platoons, 12cm mortars, 7.5cm tank-hunter platoons and a Volksgrenadier scout platoon as well. The scouts are especially interesting, adding in a scout and spearhead platoon for 8 points. 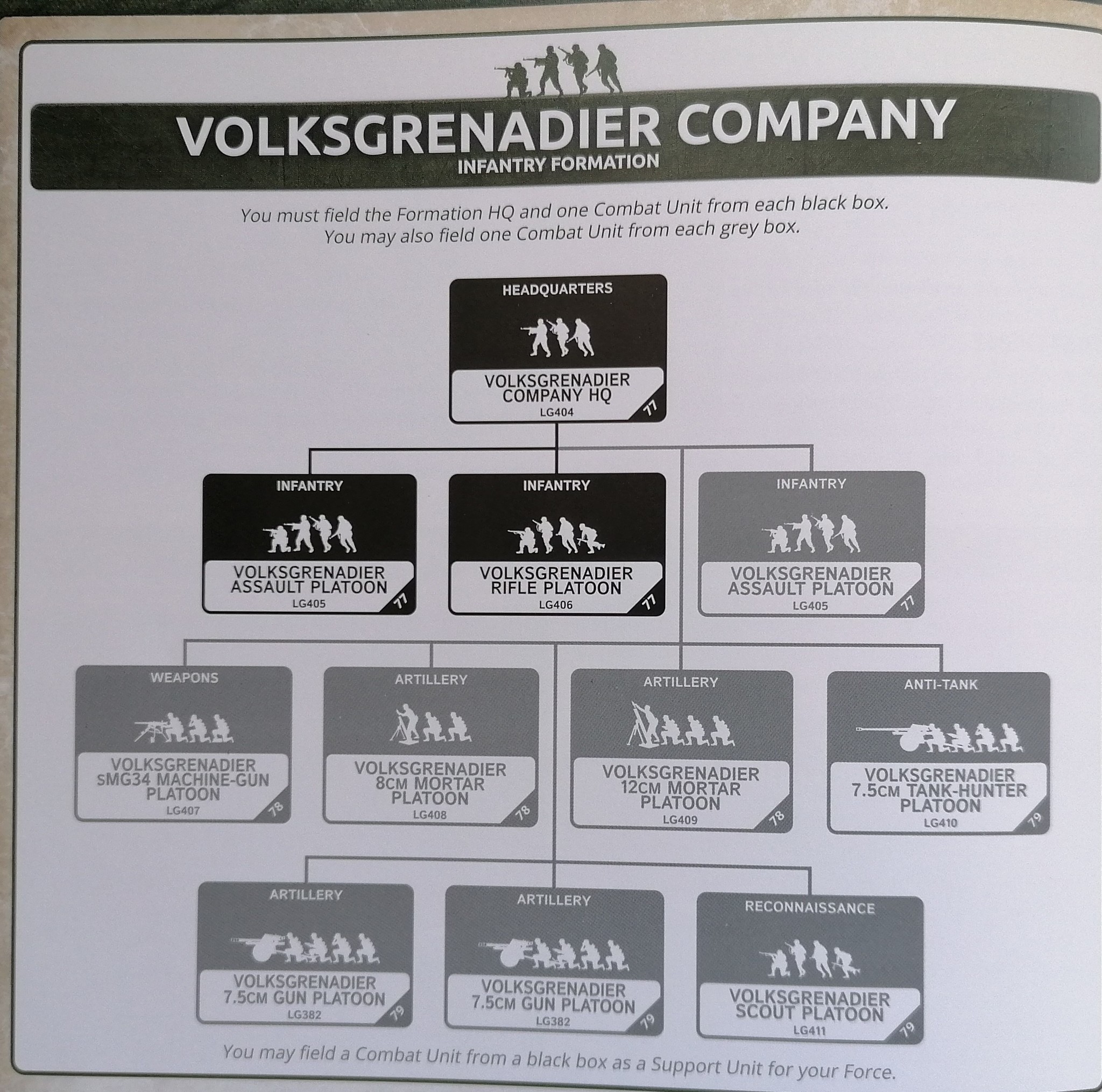 Another bit of tasty infantry flavour for you, the Brigade Armoured Assault Company now called BAAC, is a really interesting formation.

The infantry platoons are hit on 3+, 4+ skill and 5+ motivation, but come with Panzerfausts, the StG44 assault rifle and Sd Kfz 251 half-tracks. That gives you a mobile, killy formation to play with. 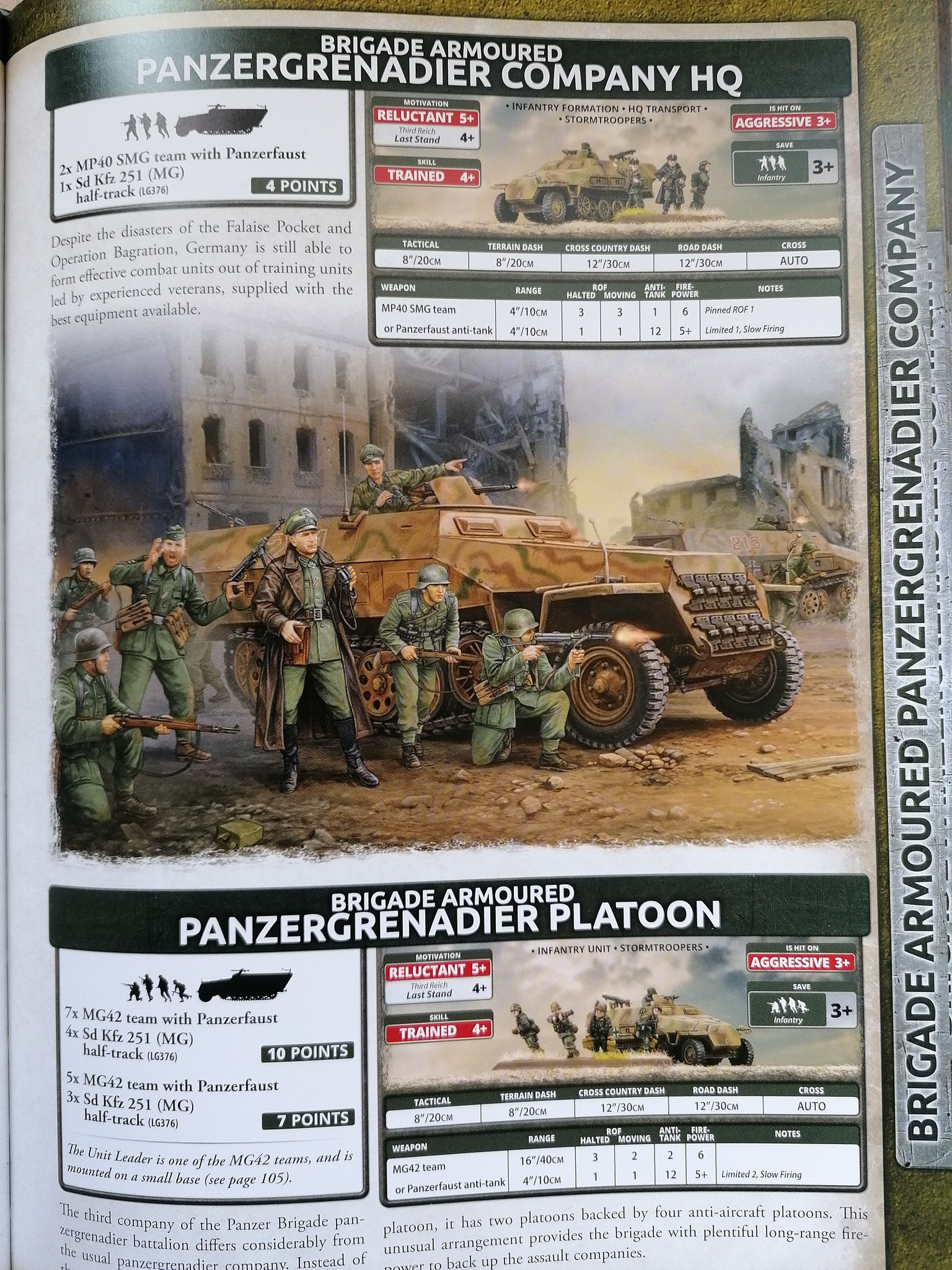 With your core filled out, you can then add in armoured flame-throwers, armoured 7.5cm guns, armoured 8cm mortars, unarmoured 12cm mortars and up to two Panzer IV-70 platoons. Oh, yes.

These guys might not be the most elite units, but they can build an interesting and flexible core formation with some nasty surprises for your opponent. 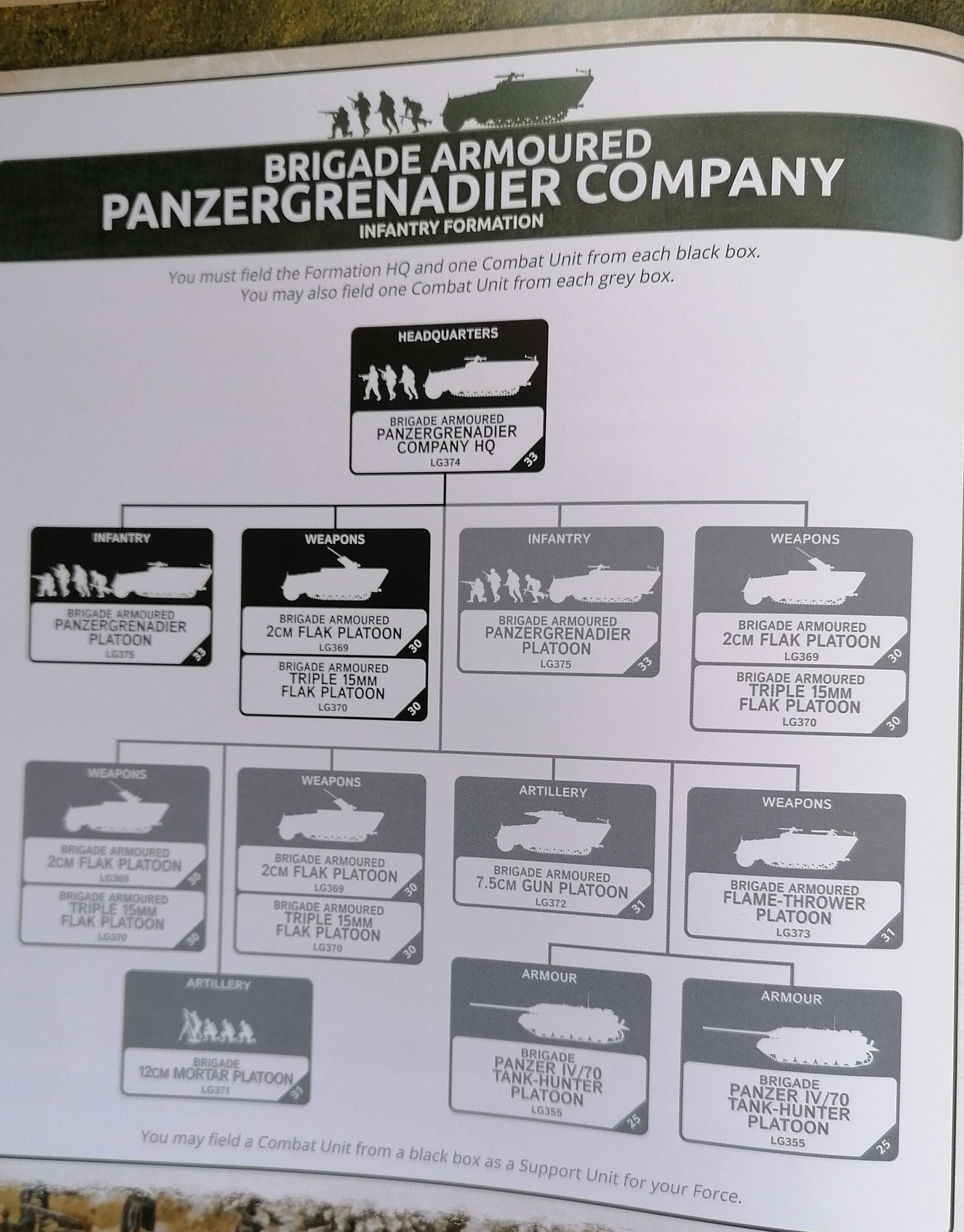 Now you’ve seen the new toys, it’s time to talk about the new start box… the heavy tank-hunter kampfgruppe. As ever, the new box from Battlefront is amazing. With the addition of two command cards, you have a 100-point army out of the box. 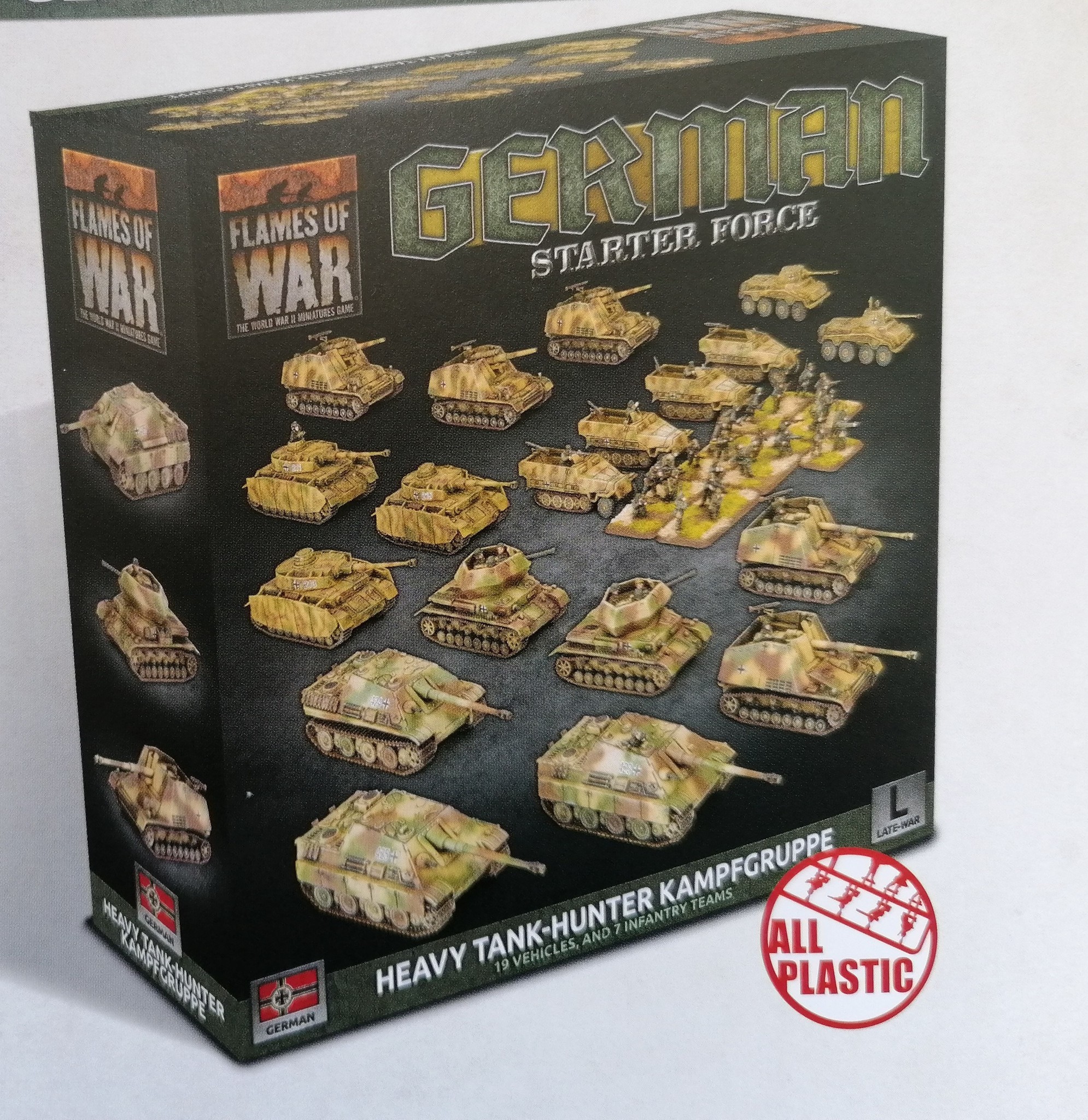 …plus the usual decals, A5 rulebook (yay!) and unit cards.

Bulge: German is an impressive addition to Flames of War and a must own for German players, whether you’re an armour player, there’s something in here for you.

You can pre-order the book, unit cards, command cards and starter army from here!