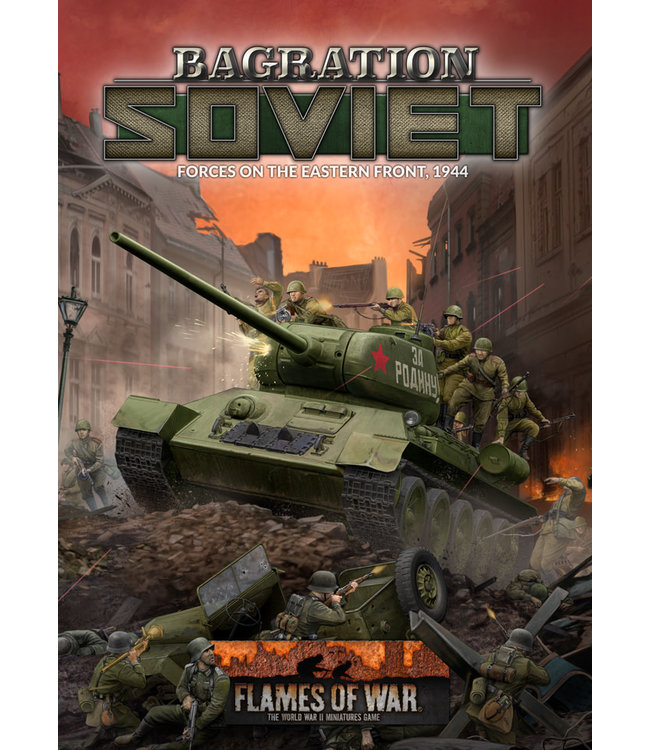 During the calm weeks leading up to Operation Bagration, the Soviets have amassed their armies for the greatest offensive yet undertaken on the Eastern Front. Three years after the German invasion, the Red Army stands as battle-hardened troops, ready to finally push the fascist invaders out of Mother Russia! A screaming barrage of shells and rockets signals the beginning of Operation Bagration, and Soviet Rifle Corps charge forward to capture the fortress towns of Vitebsk, Orsha and Mogilov.

With the D-Day series of books coming to a close it is time to shine the spotlight on the Eastern Front. The first in our series of three Bagration books is Bagration: Soviet covering the Soviet forces on the Eastern Front in 1944.This book is jam packed full of interesting Soviet Formations and Units, as well as plenty of background, and three new river crossing themed missions.

The Bagration: Soviet book starts with background covering the pivotal events of Operation Bagration, the Soviet Army’s massive offensive against the Germans centred on Byelorussia that began on 22 June 1944.

The front end of the book also features a comprehensive special rules section, Know your Tanks and Know your Infantry section to familiarise you with what you will find in the following pages.

The Force diagram is packed full of choices with nine Tank, five Infantry, and one Recon formation to choose from, as well as expansive support choices.

You will also find scattered throughout the book plenty more background covering the units and battles of Operation Bagration.