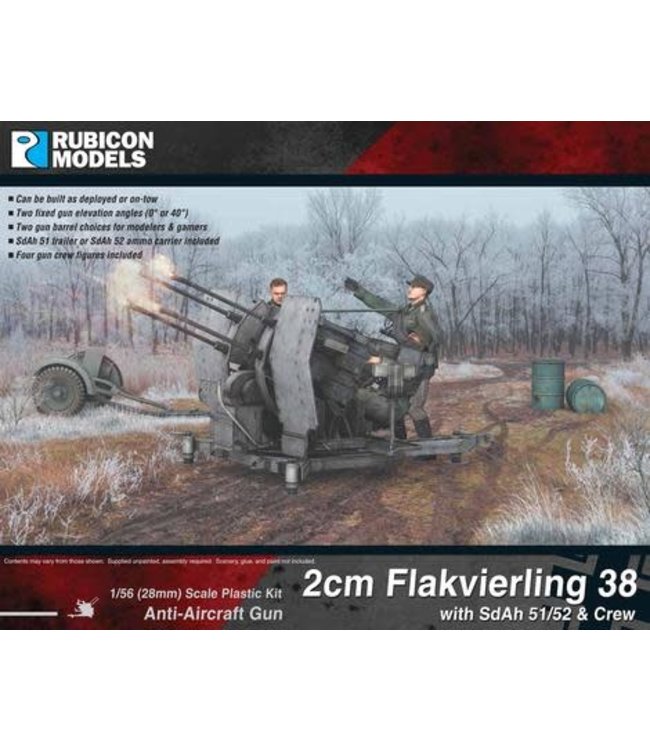 The FlaK 38 (Flugabwehrkanone 38) was a 2cm anti-aircraft gun used by various German forces throughout WW2. It was not only the primary German light anti-aircraft gun, but by far the most numerously produced German artillery piece throughout the war. It was produced in a variety of models, notably the Flakvierling 38 which combined four FlaK 38 autocannons onto a single carriage.

The term Vierling literally translates to “quadruplet” and refers to the four 2cm autocannon constituting the design.  The Flakvierling 38 consisted of quad-mounted 2cm FlaK 38 AA guns with collapsing seats, folding handles, and ammunition racks. The mount had a triangular base with a jack at each leg for leveling the gun. The tracker traversed and elevated the mount manually using two hand-wheels.

The gun was fired by a set of two pedals, each of which fired two diametrically opposite barrels in either semi-automatic or fully automatic mode. The effective vertical range was 2,200 meters. It was also used just as effectively against ground targets as it was against low-flying aircraft.

The Flakvierling four-autocannon anti-aircraft ordnance system, when not mounted into any self-propelled mount was normally transported on a SdAh 51 trailer and could be towed behind a variety of half-tracks or trucks such as the Opel Blitz, the armored SdKfz 251, the normally unarmored SdKfz 7/1 and SdKfz 11 artillery-towing half-track vehicles. It could also be mounted on tank hulls to produce fully armored mobile anti-aircraft vehicles, such as the Panzer IV-based Wirbelwind and original Möbelwagen prototype-design anti-aircraft tanks.

In Kriegsmarine use, it was fitted to U-boats, Siebel ferries and ships to provide short-range anti-aircraft defence, and was also employed in fixed installations around ports, harbours and other strategic naval targets. The Flakvierling was also a common fixture on trains, including Hitler’s own command train where pairs of them were mounted on either end of a “camelback” flatbed and covered to make them look like a boxcar. Sometimes a pair of such twin-Flakvierling cars would be used for defense, one near each end of Hitler’s Führersonderzug train.

Really detailed Model Kit of the famous "Flakvierling", you can choose between two sets of barrels, one a little Overscale for Wargamers and one set for Scaletrue Modelbuilding. Crew included, for Wargaming or Diorma Use.

Really detailed Model Kit of the famous "Flakvierling", you can choose between two sets of barrels, one a little Overscale for Wargamers and one set for Scaletrue Modelbuilding. Crew included, for Wargaming or Diorma Use.