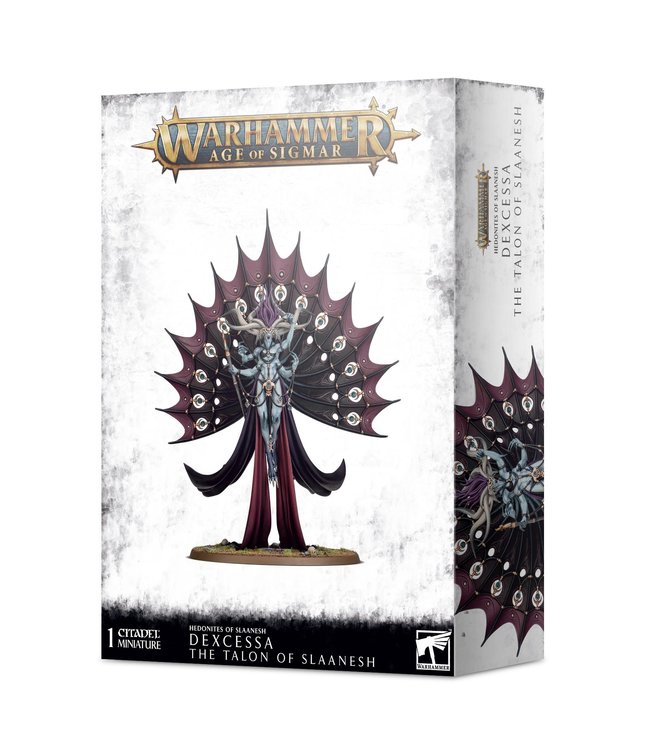 It was at the height of Morathi's ascension to godhood that a drop of Slaanesh's own divine essence broke free from imprisonment and fled the cave between realms. Called the Newborn, this cursed hybrid was suffused with both the Dark Prince's power and the residual energy absorbed by Morathi herself, coalescing into twin beings that mirrored each other in body and soul.

Perhaps taking a cue from its 'mother's' tendencies towards violence, the daemon known as Dexcessa embodies the physical excess of lethal close combat, taking perverse glee in cutting down swathes of mortals as they dance across the battlefield.

Standing several times the height of a mortal, Dexcessa is whirling dervish of taloned carnage on the battlefield, equally capable of disembowelling their foes with claws or the sturdy staff they carry to war. Their shifting, agile body makes it especially difficult for even seasoned warriors to land a blow on the Talon of Slaanesh, leaving the daemon to weave effortlessly through their lines and separate the enemy general's head from their shoulders.

The kit is comprised of 50 plastic components, with which you can assemble one Dexcessa, the Talon of Slaanesh, and is supplied with a Citadel 105mm Oval Base. This model can alternatively be assembled as Synessa, the Voice of Slaanesh.