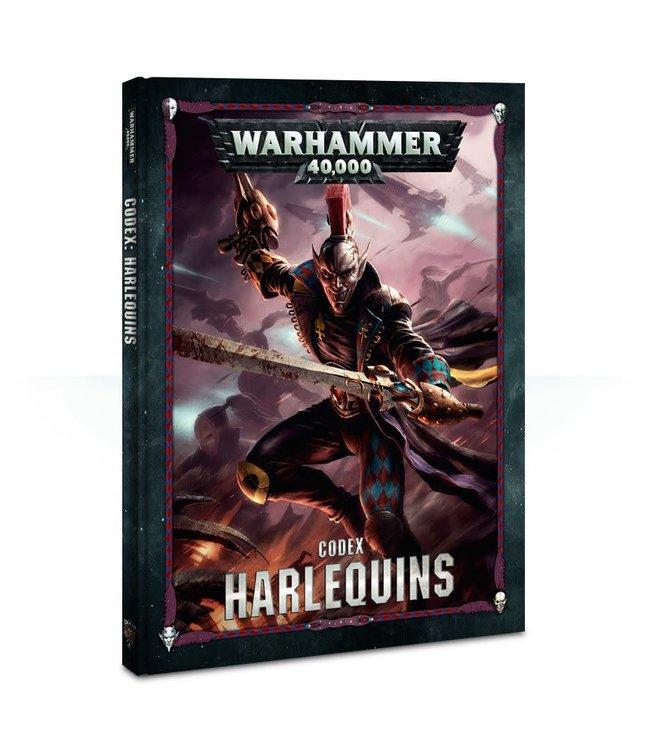 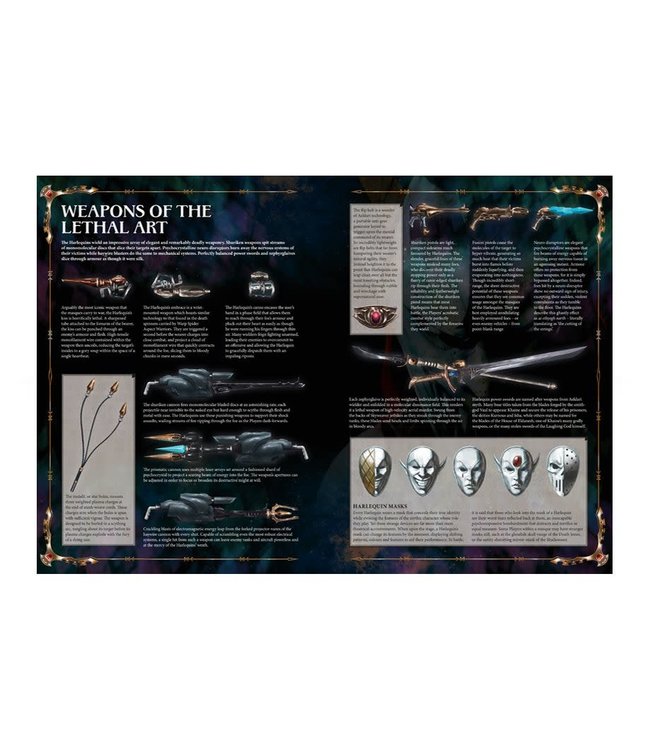 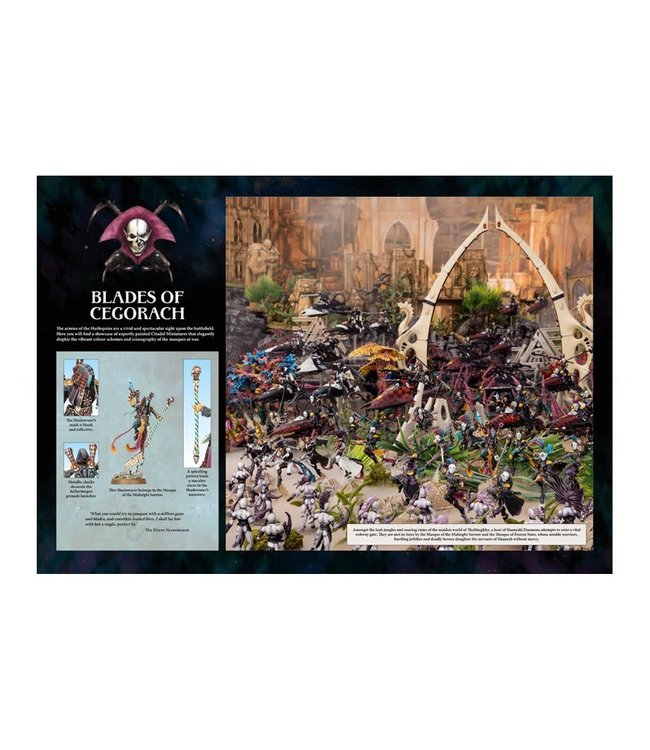 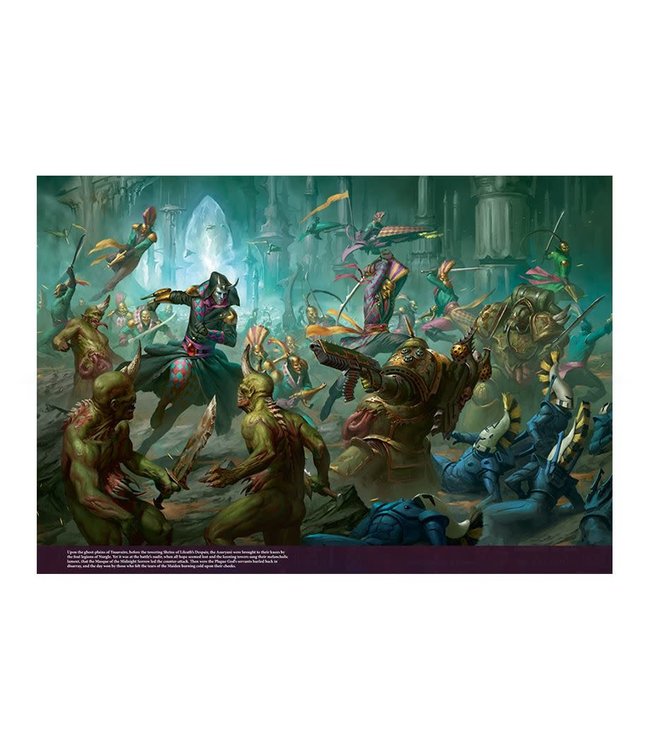 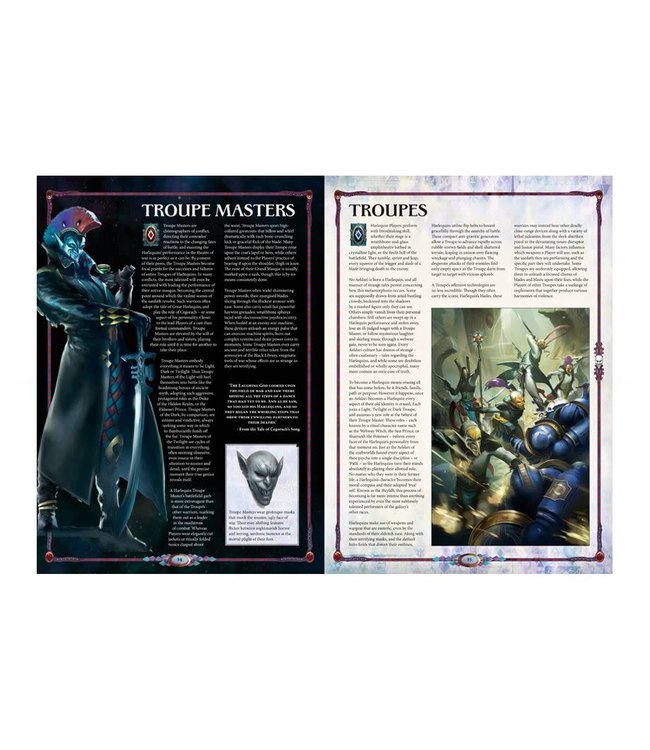 Swift beyond belief and impossibly agile, Harlequins flow through battle like silk streamers in a hurricane. As they close with the foe, the Players are in constant motion, a riot of prismatic colour that dazzles the senses. The oncoming Harlequins sprint, leap and weave, the blades and blasts of their terrified enemy whistling around them to little effect. To the untrained eye, the onset of a Harlequin masque is a riotous confusion of sound, colour and violence that to the refined Aeldari senses reveals clear patterns. Every moment is orchestrated, every Player knows implicitly how and when their comrades will strike. This is war made art and art made war, battle fought with perfect rhythm and meaning, and it is as lethal as it is spectacular.

Codex: Harlequins contains a wealth of background and rules – the definitive book for Harlequins collectors. Within this 80-page hardback, you’ll find:

- A history of the Harlequins, covering the tragic fall of the Aeldari and the Harlequins’ worship of Cegorach, a trickster god who escaped the fate of the other gods – thus protecting his worshippers from the terrible predations of Slaanesh;
- Weapons of the Lethal Art: an array of elegant, deadly weapons and wargear employed by the Harlequins; - The Great Stage: a galactic map featuring the locations of Craftworlds, webway gates, Exodite worlds and certain planets of interest to the Harlequins – Imperial and Necron;
- The Black Library: a description of this fabled realm within the webway, containing the sum total of Aeldari knowledge, which the Harlequins protect;
- Harlequin Masques: the structure and organisation of a Masque, an army and company of players both, the collectives by which Harlequins wage war, including examples of numerical runes and Troupe markings;
- Descriptions of 10 Masques and their iconic runes – The Midnight Sorrow, The Veiled Path, The Frozen Stars, The Dreaming Shadow, The Soaring Spite, The Silent Shroud, The Dance Without End, The Twisted Path, The Shattered Mirage, and The Reaper’s Mirth;
- The Dance of Ages: a timeline of major events and battles in the history of the Harlequins, from the Fall to the present times;
- Background on each unit available to a Harlequins army;
- A showcase of beautifully painted Citadel miniatures, with example armies featuring everything from individual images of models to battle scenes on terrain.

Everything you need to get a Harlequins army primed for games of Warhammer 40,000 is in here: