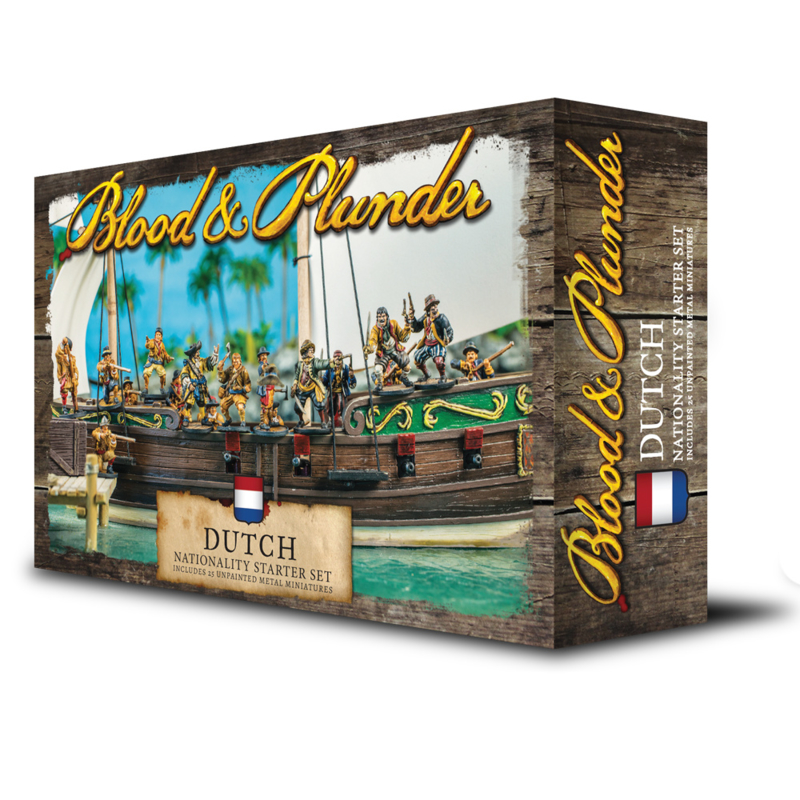 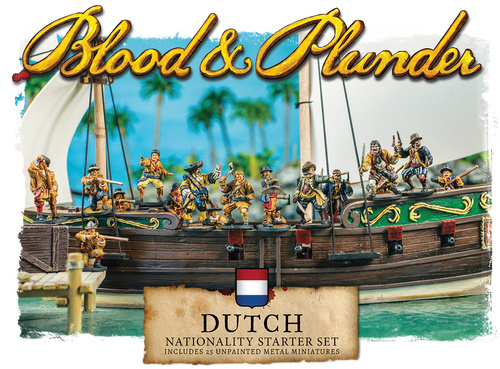 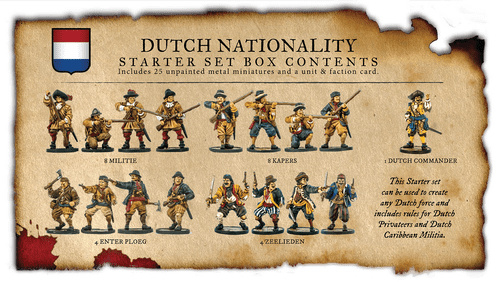 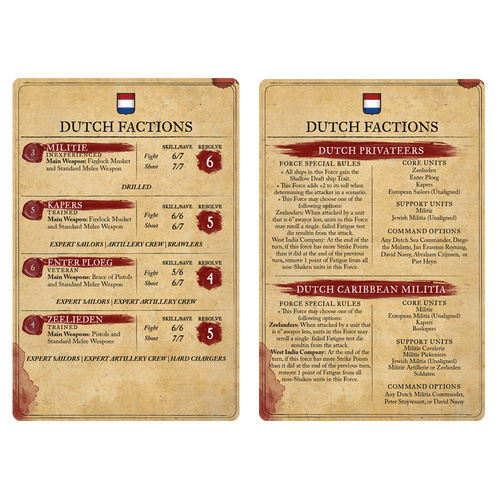 This bundle includes 25 Dutch models and allows you to build a 100 point force of either:

Dutch Privateers: In the second half of the seventeenth century, Dutch privateers in the Americas compete with English and French buccaneers for the best Dutch captains. Many would rather remain among the buccaneers even when their homeland is at war with the English or French. Others, such as the renowned Jan Erasmus Reyning, accept Dutch commissions in time of war and serve against their former brethren without hesitation. Given Dutch tolerance, it is not surprising that some Dutch privateers are commanded by captains of mixed race, the most famous being Diego the Mulatto, who first served the Dutch, then, decades later, among the French buccaneers. Dutch privateers, following a long tradition of quasi-naval sea service, are fierce, swashbuckling fighters who are proud of their heritage, often quick to anger and quarrel, and who possess superb skills in seamanship and gunnery.

Dutch Caribbean Militia: The Dutch militias in the Caribbean and South America are largely a product of the Dutch West India Company. They are organized and armed similarly to those of the English and French with a couple of exceptions. First, they are often augmented by small numbers of hired professional soldiers. Second, given the great Dutch tolerance for a variety of religious faiths, especially as compared to other European nations, Dutch militias tend to be much more diverse. In Brazil, Surinam, and the Caribbean, it is not uncommon to have large numbers of Jews serving in the militia, and at least some companies appear to have been entirely Jewish. Dutch militia companies are typically of two sorts, reflecting the practice in the Netherlands: the Burgher Guard composed of social elites, and the common militia. As is ever the case, the effectiveness of militias depends on equipment, training, and how often they are called to arms to fight rather than drill. In Brazil and Surinam, Dutch militia companies are prepared in time of war to engage European enemies, and are always prepared to defend against Native Americans protecting themselves from European encroachment. In the Caribbean, the Dutch militia companies seldom see action except in time of war, defending against raids and invasions, or augmenting Dutch expeditionary forces. Dutch militias are generally well-trained, and even merchants take great pride in their service. Long arms range from match-lock muskets and bandoliers with chargers to flintlock muskets and cartouche boxes, depending on the time and place, although the matchlock predominates through much of the century.