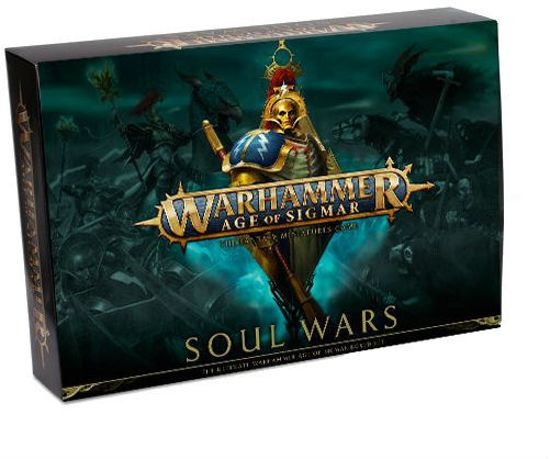 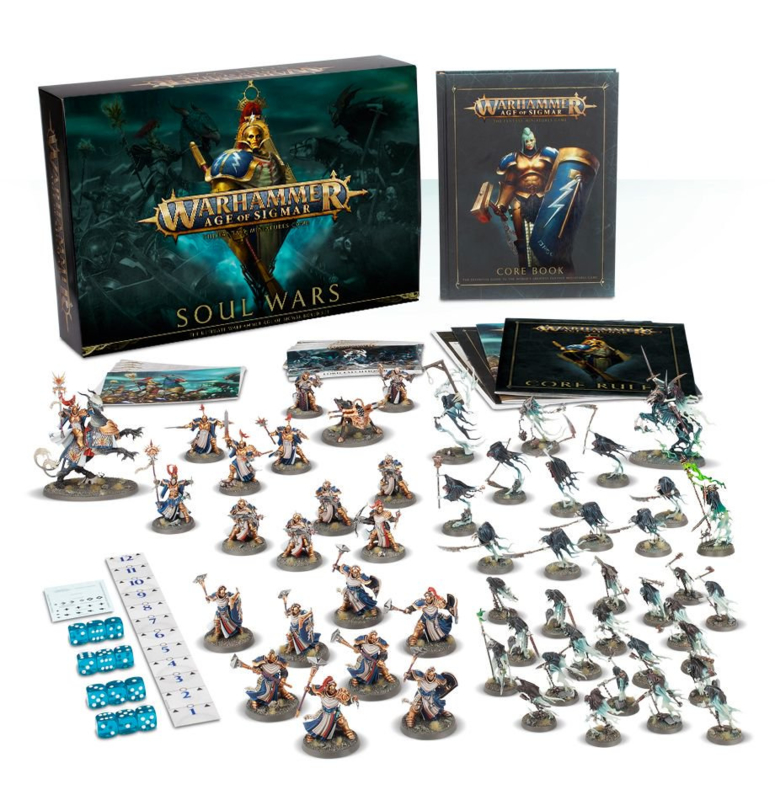 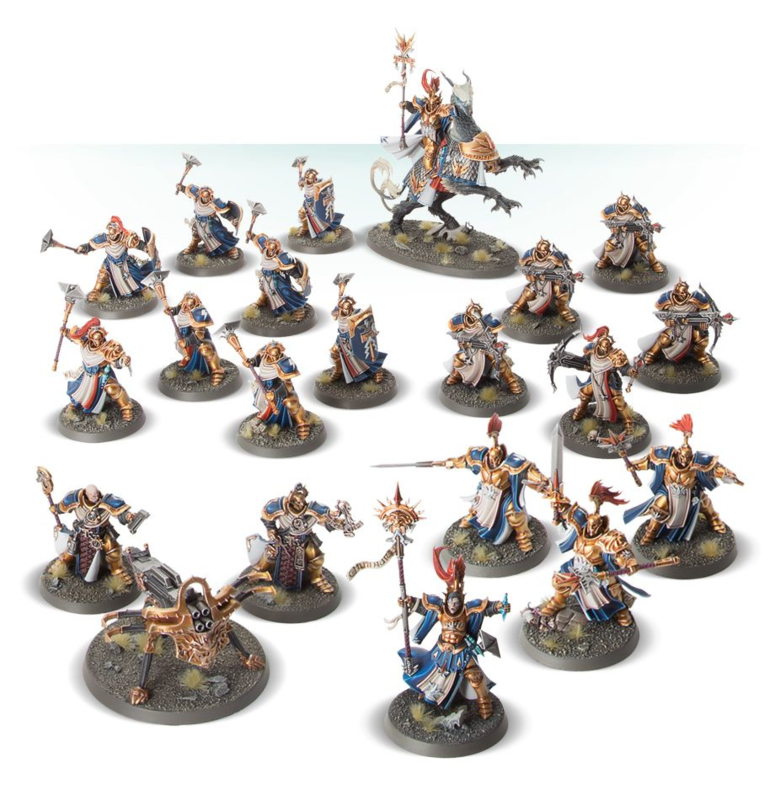 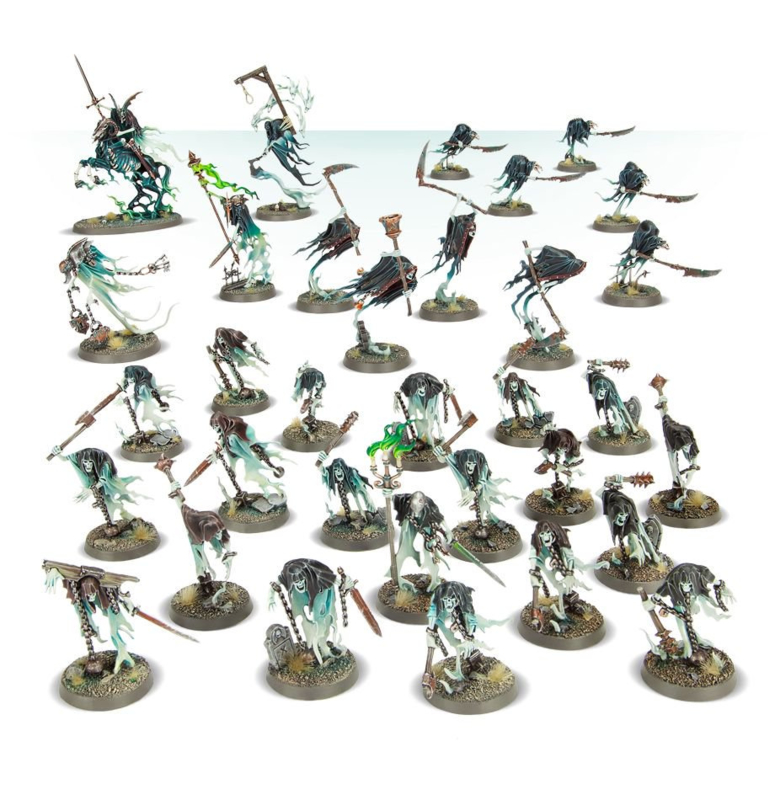 The Realmgate Wars were fought over the magical portals that bound the Mortal Realms together, but another conflict has been brewing in the shadows for thousands of years. This is a battle not for resources, nor for pure conquest, but for the immortal souls of the living and dead; a cosmic rivalry between gods who have carried their hatred through the ages. The spread of the light of civilisation, spearheaded by the God-King Sigmar, faces a dire threat posed by the Lord of Undeath, Nagash. Sigmar’s Sacrosanct Chambers, created to fight daemons and wraiths, face the malevolent spirits known as Nighthaunts in a battle for the free city of Glymmsforge…

Containing 52 push-fit Stormcast Eternals and Nighthaunt miniatures, along with a 320-page hardback Core Book and an exclusive 32-page Battle of Glymmsforge booklet, Soul Wars is the perfect boxed set for those who want to dive into this exciting new chapter in the Age of Sigmar right away. Included:

Warhammer Age of Sigmar: Soul Wars contains 52 miniatures – 33 Nighthaunt, and 19 Stormcast Eternals – providing 2 players with an army each with which to do spectacular battle. Each miniature is push-fit, with no glue necessary, meaning you can have them assembled and ready for war impressively quickly:

- A Knight of Shrouds on Ethereal Steed: a particularly sinister Nighthaunt leader atop a skeletal steed wearing ram’s horns, he wields a sword of stolen hours in his right hand;
- A Lord Executioner: distinguishable by the macabre gallows lashed to his back (and the screaming souls surrounding it), this miniature is armed with a decapitating greataxe;
- A Guardian of Souls: this Nighthaunt wizard carries a chill blade in his left hand, with a tall nightmare lantern in the other, used to summon the spirits of the dead;
- A Spirit Torment: masked and pitiless, this miniature uses the heavy shacklegheist chains he carries to attack his enemies in swinging arcs;
- 4 Grimghast Reapers: cursed, indiscriminate killers, the Grimghast Reapers are armed with double-handed slasher scythes – their leader, the Extoller of Shyish, carries a great bell known as the death knell;
- 5 Glaivewraith Stalkers: unstoppable gheists drifting inexorably towards their prey, each attacks with a 2-handed hunter’s glaive;
- A 20-strong Chainrasp Horde: each armed with a malignant weapon – axes, swords, and flails feature heavily here – this frightening force is led by a Dreadwarden, who wields a 3-pronged candelabra.

- A Lord-Arcanum on Gryph-charger: a splendidly-armoured, mounted centrepiece carrying an aetherstave. His Gryph-charger is rearing high, showing off its sharp claws and razor beak;
- A Knight-Incantor: this female Stormcast Eternals wizard is armed with an incantor’s staff, and carries spirit flasks and a voidstorm scroll;
- 3 Evocators: a unit of Stormcast Eternals wizards, each armed with a tempest blade and stormstave, led by an Evocator-Prime;
- A unit of 5 Castigators: each armed with a thunderhead greatbow specially designed to destroy the ethereal, this unit is led by a Castigator-Prime;
- 8 Sequitors: led by a Sequitor-Prime, this unit of fearsome warriors is armed with stormsmite mauls, along with soulshields;
- A Celestar Ballista: a large piece of mobile artillery that launches bolts of blessed sigmarite, crewed by 2 Stormcast Eternals clutching not only sigmarite blades but a variety of instruments used to calibrate the ballista.

Warhammer Age of Sigmar: Soul Wars is packed with gaming content – the complete, unabridged Warhammer Age of Sigmar Core Book is included, full of background and rules, along with 3 booklets that explain how to play games, from the basic rules to the more advanced, optional rules you can slot in at your leisure:

An 8-page booklet providing essential information about the Age of Sigmar, the contents of the box you’ve just opened and the hobby of collecting, building, painting and playing with Citadel miniatures. Includes an overview of the Nighthaunt and Stormcast Eternals factions, as well as a Battleplan!

This is a 320-page hardback book filled with rich history, background and rules you can use to play your games of Warhammer Age of Sigmar in whatever way you see fit. Open Play, Matched play and Narrative Play sections are included, each of which can be tailored to your preference. Contained within:

- Detailed background on the history leading up to the Age of Sigmar, from the destruction of the world-that-was to Sigmar’s discovery and exploration of the Mortal Realms, the civilisations that rose and the Age of Chaos that destroyed them, from the glorious vengeance meted out by Sigmar’s Stormcast Eternals to the vile plan set in motion by Nagash, Supreme Lord of the Undead, which threatens every mortal soul to have ever lived – and sets in motion the Soul Wars this box represents;
- The full Core Rules – an illustrated and annotated guide showing how to play Warhammer Age of Sigmar in an easy to follow manner;
- A guide to Open Play games, including a Battleplan Generator which helps you choose objectives, special rules and victory conditions; Coalition of Death rules for team-based play (with 3 Battleplans); and in-depth rules for Ladder Campaigns;
- A guide to Narrative Play games, including an annotated example game; a guide to setting up Historical Battles;
special rules and 2 Battleplans for re-enacting sieges; rules and 2 Battleplans for fighting in the tunnels and caverns beneath the Mortal Realms; and Triumph & Treachery rules for 3 or more players;
- A guide to Matched Play games, which allow players to test their mettle in evenly-matched games of skill and tactics with Pitched Battles allowing for different battle lengths, rules for fielding Warscroll Battalions and Allied units and a table of Battle Strategies providing unpredictable objectives and outcomes to challenge even the most battle-hardened general.

This 32-page booklet sets the scene for the included miniatures – featuring background on the Soul Wars, details of the Stormcast Eternals’ Sacrosanct Chambers and the history of the Free City of Glymmsforge, the most sacred of Sigmar’s strongholds. On top of this is an overview of Shyish – the Realm of Death – and Nagash’s grand plan; part of which includes an undead assault on Glymmsforge.

It includes information on each miniature in the box – their place in their army, their abilities and their origins, and Pitched battle profies for each – as well as an inspiring showcase of beautifully-painted models.

13 Warscroll Cards are also included: these are handy, small-format cards containing the rules for each unit included in the box.

This is a 16-page booklet containing everything you need to begin playing games of Warhammer Age of Sigmar right away. Illustrated examples of every mechanic in the game are here, with step-by step instructions taking you through movement, attacking, using abilities, using magic and testing for battleshock.

It includes rules for terrain, explanations of Warscrolls, Warscroll Battalions and Battleplans, Realm of Battle rules and Allegiance Abilities. On its own, this is everything you need to set up and play immediately – combined with the myriad optional rules found in the Core Book it’s an incredibly powerful and flexible basis for playing wargames with your miniatures the way you want to.

Of course, the expansive, flexible rules and spectacular miniatures are hard to use without some accessories: Soul Wars includes:

- 12 14mm, 6-sided turquoise gem dice;
- A 12” transparent range ruler;
- An easy to follow, colour construction guide with step by step instructions for each miniature, making the push-fit models even easier to build
- A Stormcast Eternals transfer sheet.
Also included is a 32-page preview of the Black Library novel Soul Wars, whetting your appetite for further adventures in the Age of Sigmar.